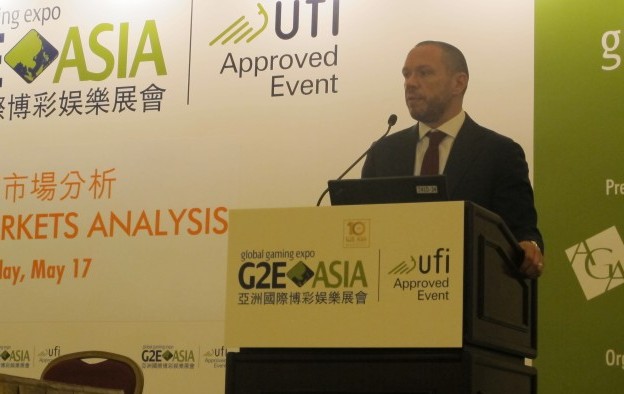 The return on invested capital (ROIC) for new casino resort projects opening in Macau could still average about 17 percent despite the recent headwinds in the local gaming sector, said Aaron Fischer (pictured), head of consumer and gaming research of brokerage CLSA Ltd.

“It [project ROIC] is still exceptionally high” but it was a sharp decline compared with an ROIC of over 50 percent in the peak of the Macau market, said Mr Fischer. He was speaking at the Asia Gaming Market Outlook conference session on the first day of Global Gaming Expo (G2E) Asia 2016 held in Venetian Macao. The trade show and conference on the Asia-Pacific gaming industry is co-organised by Reed Exhibitions and the American Gaming Association.

“If you look back at the peak… the [annual] ROIC for some of the properties like [Galaxy Entertainment Group Ltd’s] StarWorld and [Sands China Ltd’s] Sands Macao were over 100 percent,” he said. “In a normal [open-licence] market we [would] see… a huge increase in the number of projects – we would have 40 projects under construction – but [in Macau] there are only six [gaming] licences and a limited [supply of] land that has prevented an oversupply situation.”

CLSA predicts Macau gaming revenue will fall 1 percent this year, after plummeting 34.3 percent year-on-year in 2015. The sector is likely to resume growth in casino gross gaming revenue (GGR) in 2017 with an average increase of 7 percent across the period 2016 to 2020, thanks to rising personal incomes among consumers in the region, and growing appetite for outbound travel by mainland Chinese, Mr Fischer added. The mass market would grow 10 percent on average in the next five years while the VIP market would probably rise by a smaller amount at 4 percent, the brokerage added.

He also explained why the two new gaming projects that opened in Macau last year had failed to expand the market. The launch of Galaxy Macau Phase 2 and its sister property Broadway Macau in May last year were not considered fresh from the perspective of visitors as they were “considered to be an extension of the initial property”, while the Studio City launch last October faced a number of challenges like the ongoing construction works nearby, he remarked.

“If you speak to the casino companies directly they might say there isn’t any cannabalisation [of the market] but what we saw last year is that the new properties didn’t grow the market,” he added.

“But we are more optimistic on the upcoming properties and the two that we are most positive about are The Parisian and Wynn Palace,” the analyst said, based on the location, size and positioning of the new projects, as well as the past track records of the operators. Wynn Palace, a new property of Wynn Macau Ltd and an addition to its flagship premises on Macau peninsula, is expected to open in August, while The Parisian, from Sands China Ltd is likely to open later in 2016.

“Despite the fact that the VIP market has been weakening over the past couple of years we still have a preference for high-end properties because Macau is going to be fully built out in a short period of time and we won’t see any new properties being developed in a decade,” he said. “So we think it’s more advantageous to have a better quality property opening up.”

The new hotel, The 13, owned by Hong Kong-listed Louis XIII Holdings Ltd, is also a pick of the CLSA analyst. “It is targeting a special niche, the premium customers, and we think that it is the first property opening in Macau that will put Macau on the map to attract players from Southeast Asia and the Middle East,” he added.

Talking about other Asian markets, Mr Fischer said there would be a lot of growth potential in the medium term in the Philippines, with the market likely to expand 8 percent on average in the next few years. But the growth could be constrained by the current shortage of quality infrastructure in that country, as well as a perception among outsiders that the safety if visitors was an issue, he said.

Regarding the current lack of progress for gaming legislation in Japan, he anticipated the first gaming resort there could only open its doors in 2023 at the earliest.

Hong Kong-listed Wynn Macau Ltd says it will inject nearly MOP4.80 billion (US$596.4 million) into Wynn Resorts (Macau) SA. That is in order to comply with Macau’s revised gaming law and the... END_OF_DOCUMENT_TOKEN_TO_BE_REPLACED