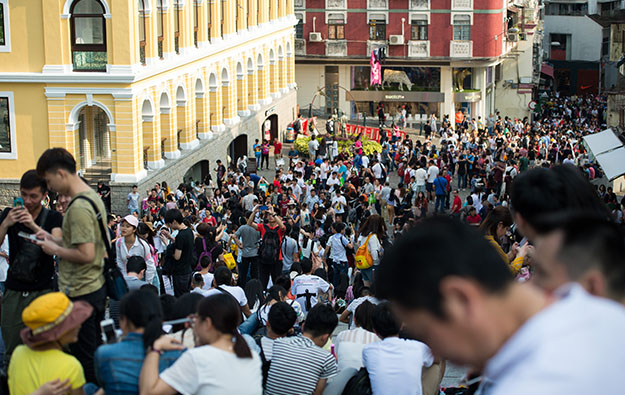 Most of the Macau-based general public that responded to the survey portion of a government study on the matter, support the idea of a per-head tax on tourists visiting Macau. Survey respondents working in the local travel trade are mostly against it. Those findings are included in a summary issued on Thursday of the work done by the Macao Government Tourism Office (MGTO) under the “Feasibility Study on Tourist Tax Imposition”.

Work on the study began last year, and was scheduled to be completed in the fourth quarter. It has now been submitted to the city’s government for consideration, said on Wednesday a tourism bureau senior official. He had flagged that the amount being discussed for any such tax was in the range of MOP200 (US$25) to MOP100.

The study on a tourist tax would serve as “scientific grounds for formulation of government policies”, MGTO said. The local government would also consider a range of factors – namely the health of the local economy, the “destination image” of Macau, and the city’s role in the Guangdong-Hong Kong-Macau Greater Bay Area – when considering the tourist tax subject, the office added in its Thursday statement.The Greater Bay Area is a Chinese central government initiative to bind the people and economies of those places more closely.

MGTO said that under the public survey portion of the study, it had managed to retrieve 14,900 completed questionnaires from among the sets of questionnaire papers it had distributed to the public, including to the Macau general public, travel trade workers and visitors.

Of the respondents identifying themselves as “residents”, MGTO said “95 percent” supported a tourist tax being applied in the city. But for those describing themselves as travel trade industry representatives, “80 percent” were against the idea.

The tourism bureau also noted that “50.6 percent” of respondents identifying themselves as “visitors” said their intention to visit Macau would be “affected” if a tourist tax were imposed.

MGTO said it had also conducted case studies regarding “other countries and regions” that imposed a tourist tax. Thursday’s press release didn’t mention the places studied. But it suggest findings indicated that imposing a tourist tax might at best only lead to a “slight slowdown” in the growth of visitor arrivals – and only at the point of imposition of such a measure. For some places, it had made no difference to arrivals growth.

The tourism bureau also mention in its Thursday summary of the study that it had indicated “complicated administrative formalities” could result from imposing such a tourist tax, as a large number of Macau’s inbound visitors came via land-based border crossings that are already busy at peak times

The full version of MGTO’s feasibility study was not – at the time this story went online – available to the public.

A Macau court was offered evidence on Monday, including of recordings from police-wiretapped telephone conversation, that the prosecution says proves the direct involvement of Levo Chan Weng Lin... END_OF_DOCUMENT_TOKEN_TO_BE_REPLACED