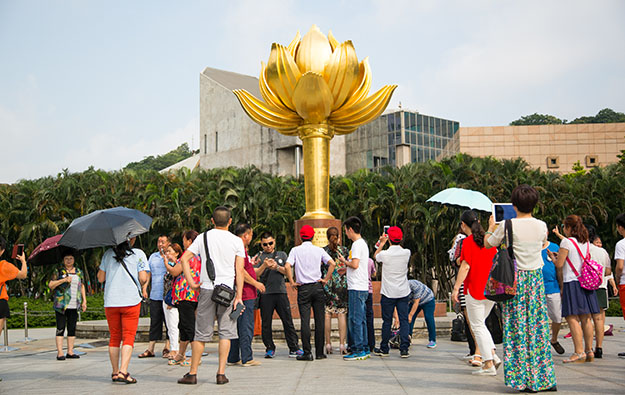 The Macao Government Tourism Office (MGTO) says the city is getting ready to receive package tours from mainland China in November. That is despite the announcement in recent days of Covid-19 infection in Macau.

In a written reply to GGRAsia, MGTO said it was “actively preparing to welcome the return” of group tours (file photo) and the reinstatement of electronic travel permit issuance under the Individual Visit Scheme (IVS) for travellers from some mainland places.

On Wednesday, the Macau authorities announced that a 66-year-old local woman had been detected via routine-sample testing as having Covid-19. Her son, a 31-year-old man, and the woman’s 63-year-old sister had also tested ‘positive’ for infection, according to Friday statements. The three cases have been classified as “low risk” to the local community.

The Macau authorities and their mainland counterparts have been discussing details for the gradual resumption of package tours. Initially the package tour visitors would be from the provinces of Guangdong, Zhejiang, Jiangsu and Fujian, and the city of Shanghai.

“The measures are slated to be implemented gradually from November, with more details to be announced by the relevant authorities in due course,” stated the tourism office in its reply to GGRAsia.

MGTO also said it was “engaged in the preparation works for the implementation of the measures for the package tours”. Such efforts were being coordinated with other governmental departments in Macau, with tourism industry operators, and mainland counterparts, it added.

The tourism office added it was moving forward with promotional campaigns targeting the “four provinces and one municipality” covered by the tour group initiative, as well as in key cities in the Guangdong-Hong Kong-Macau Greater Bay Area.

On Wednesday, Macau’s Health Bureau published official guidelines for group tours from the mainland, saying it would be necessary to limit the number of people on each tour, and that a detailed itinerary would have to be submitted to the authorities. The guidelines also specify other conditions that the city’s travel trade needs to follow as countermeasures against Covid-19.

Tongcheng Travel, an online platform serving mainland China customers, said that within an hour of the news about the Macau tour guidelines, there was a surge in Macau-related enquiries on its search engine, according to a report by the Yicai Global news service.

The media outlet said the popularity of “Macau” as a keyword on the Tongcheng Travel site jumped 237 percent over the same period the previous day, while searches for hotels in Macau were up 160 percent, and the number of queries for air tickets and flights between the mainland and Macau rose 150 percent.