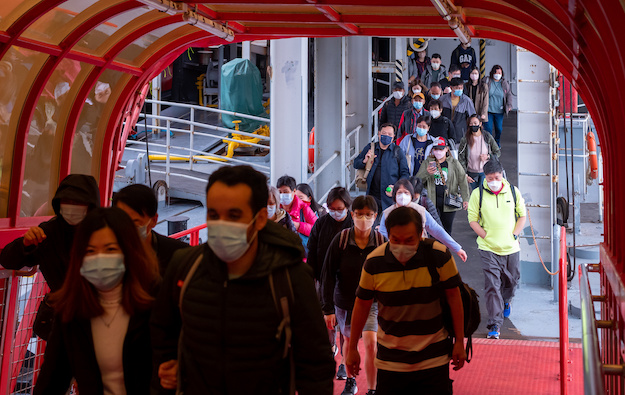 Macau saw a total of 39,643 visitor arrivals on Sunday (January 8), with more than half the tally entering the city via the Border Gate land crossing with neighbouring Zhuhai, according to data released by Macau’s Public Security Police.

Sunday’s spike in visitor arrivals coincided with Macau’s decision to cancel with effect from January 8 most of its travel restrictions related to the Covid-19 pandemic, dropping all testing requirements for inbound travellers from mainland China, Hong Kong and Taiwan. The authorities on the Chinese mainland also substantially eased from Sunday travel restrictions with Hong Kong and Macau, with most Covid-19 controls scrapped.

The jump in visitor arrivals on Sunday also coincided with the resumption of ferry services between Macau and the Central district in neighbouring Hong Kong. In a first phase, about 10 round trips per day in aggregate are available between the Sheung Wan ferry terminal in Hong Kong and the Taipa Maritime Passenger Terminal, near Macau International Airport.

The first sailing from the Sheung Wan ferry terminal to Macau (pictured) – the first in nearly three years – arrived in the city around 8.30am, carrying about 130 passengers. A total of 2,157 visitor arrivals was recorded at the Taipa maritime terminal on Sunday, according to the data made available by the local authorities.

A limited number of ferry services between the Taipa ferry terminal and Hong Kong International Airport had restarted on December 30.

Since Sunday, the direct bus service between Macau and Hong Kong via the Hong Kong-Zhuhai-Macau Bridge – locally known as ‘golden bus service’ – also became again available round the clock.

Some Macau casinos visited by GGRAsia on Thursday, actually had tables that were closed, notwithstanding strong consumer demand during Chinese New Year (CNY). The reasons for some tables being... END_OF_DOCUMENT_TOKEN_TO_BE_REPLACED