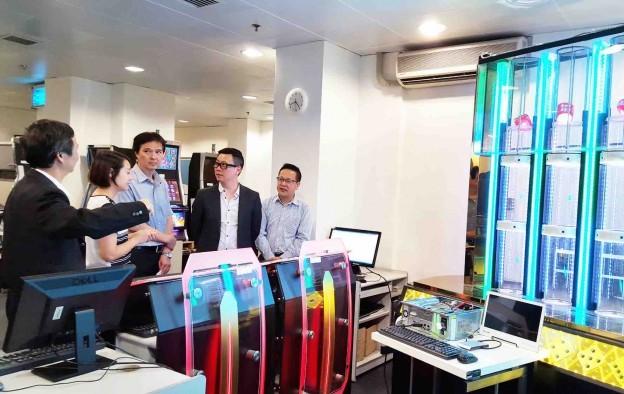 The announcement from the bureau – a body also known as DICJ – neither quoted Mr Chan directly, nor clarified what types of machines might be considered.

The statement – issued in Portuguese and Chinese, Macau’s official languages – did however indicate that such products could offer something different from what is currently in the market, in a bid to close the gap between the revenue from mass floors and VIP rooms: currently both segments draw the bulk of their revenue from live dealer baccarat.

The bureau announcement also indirectly quoted Mr Chan saying there was a need for structural adjustment of the gaming industry if Macau is to diversify its economy and achieve sustainable development.

The regulator’s announcement said both companies expressed full support for the Macau government’s aim of increasing the mass-market appeal of the gaming sector.

“Future meetings will be scheduled between the DICJ and GLI to make this [market enhancement] happen, step by step,” said GLI in a statement on Friday.

In an email sent to GGRAsia on Thursday, Lim Yu Chiang, BMM’s business development director for Singapore, Macau andAsia Pacific, said that the company would continue to work with the Macau authorities – via its existing partnership with Macao Polytechnic Institute – to “transfer testing and industry knowledge and expertise to students and professionals”.

He added: “Electronic gaming machines are having an increasing impact in the Macau mass market given the improvements in technology and game innovation.”

The idea that Macau and other Asian gaming jurisdictions might wish to consider introducing new types of gaming products – possibly including ones that were entertainment focused rather than gambling focused – was raised at a conference session moderated by GGRAsia during Global Gaming Expo (G2E) Asia held in Macau in May.

Walter Bugno, chief executive of international at slot machine and lottery equipment supplier International Game Technology Plc, told the G2E Asia panel audience: “I’m not sure that the growth of slot machine revenue in Macau is as much driven by change as by players becoming more comfortable and more aware and more used to playing on an electronic gaming device.”

Trevor Croker, executive vice president global products and insights at Australia-based slot machine maker Aristocrat Leisure Ltd, said during the same panel session: “We are in a ‘fashion’ industry – [one] that’s driven by technology – and we have to take alternative bets [chances] and we have to do that on an educated basis.”

Derik Mooberry, executive vice president and group chief executive of gaming at gaming machine and lottery supplier Scientific Games Corp, noted during the G2E Asia panel: “We’re always trying to change; we’re always trying to innovate… the mathematical changes we are putting in… or to the game mechanics… there’s a tremendous amount of time spent on [that].”

In a recent interview with Ian Hughes, vice president of global services at GLI, and also chief executive, GLI Asia Pacific, GGRAsia asked the executive if he anticipated there would be any further updates in the Macau market relating either to technical standards or to the regulations governing, respectively, electronic gaming machines and electronic table games.

“I haven’t noticed anything [different] from our side of things, other than a great willingness to engage,” said Mr Hughes.

Macau recorded 965 “gaming-related” crimes in full-year 2022, down 29.7 percent on the 1,372 identified in the previous year, according to the latest statistics published on Tuesday by... END_OF_DOCUMENT_TOKEN_TO_BE_REPLACED