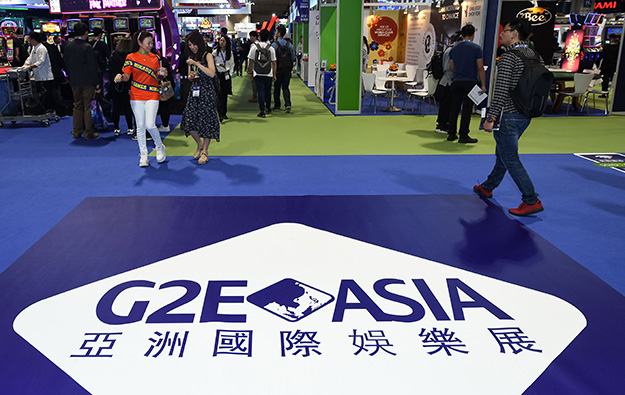 Macau’s casino regulator, the Gaming Inspection and Coordination Bureau, has confirmed in an email to GGRAsia that it is investigating what it termed suspected promotion of “illegal online gaming” at the ongoing Global Gaming Expo (G2E) Asia 2019 trade show in Macau.

The statement did not clarify whether the gaming bureau was concerned specifically about what was legal in the Macau gaming market.

The email added however that its concerns had led to its decision not to be represented at the show’s opening ceremony, unlike in previous editions.

A statement emailed to GGRAsia and described as being on behalf of G2E Asia said: “G2E Asia has been working closely with the Macau SAR authorities to ensure the integrity of the show and that its exhibitors meet with all regulatory and legal requirements.”

G2E Asia is promoted by Reed Exhibitions and the American Gaming Association.

The news about the investigation and the regulator’s decision not to attend the show’s opening ceremony or to send a speaker, had first been reported by local media outlet Macau News Agency in a story with Wednesday’s dateline.

Paulo Martins Chan, the head of Macau’s regulator – a body also known as DICJ – had been scheduled to speak on Wednesday, the second day of G2E Asia. But by the time the show began, his name disappeared from the schedule, and no one else from the body appeared in his place.

“Noticing that certain association [sic] and the public have recently reported that there are exhibitors suspected of using the Macau exhibition to promote illegal online gaming, the DICJ believes that before a detailed investigation on the matter is completed to dispel the doubts of the public, it will be more proper for the bureau not to attend activities held by the respective exhibition organiser,” stated the gaming regulator in its email to GGRAsia in response to our enquiry.

The statement on behalf of G2E Asia said: “In close coordination with the DICJ, G2E Asia reinforced its endeavours to support any inspection work of DICJ and to remind exhibitors about the law and regulations in the Macau SAR.”

This year G2E Asia is on two floors at its long-standing venue, the Venetian Macao casino resort.

The upper floor of the trade show has a number of online gaming service providers, some offering so-called “turnkey solutions” for consumer-facing online gaming platforms. Some specified that such services were not available for use within Macau.

The gaming bureau said in its Wednesday statement to us: “During the period of the exhibition, the DICJ will send inspectors to conduct more frequent inspections, and will distribute illegal online gaming [information] leaflets to the exhibitors to remind them about the laws of Macau.”

Macau law firm Rato, Ling, Lei and Cortés, wrote in a 2016 research paper about the prospects for online gaming in the local casino market: “It is clear that no licences are available to enable operators to offer remote gambling services in Macau, even though authorisations have been granted for the Macau Jockey Club (horse racing), Macao Yat Yuen (greyhound racing) and Macau Slot (sports betting) to accept online bets – which are presently the only legal options for online gaming in Macau.”

It is not the first edition of G2E Asia to face issues relating to trade-show marketing of online gaming.

Last year’s event had restrictions imposed by Macau’s gaming bureau on live online casino operations and demonstrations at the show, according to a statement at the time from Josephine Lee of Reed Exhibitions Greater China.

This year the trade event included financial technology or “fintech” elements including blockchain, and their potential use in gaming payment systems, as well as companies offering online gaming.

At a preview gathering in January, Vera Ng, G2E Asia project director on behalf of Reed, confirmed to GGRAsia that the Macau authorities had been consulted about the fintech elements of this year’s event.

Wednesday’s statement on behalf of G2E Asia said: “Throughout the course of its 12 years of operation, G2E Asia has gained tremendous support from the government, regulatory authorities, operators and associations to become a landmark MICE [meetings, incentives, conferences and exhibitions] event in Macau.”

The organisers’ statement added: “G2E Asia respects the decisions of all invited guests and will continue to provide contribution to Macau and the local community from financial and social perspectives. We look forward to [DICJ] director Mr Chan joining G2E Asia next year.”

A Macau court was offered evidence on Monday, including of recordings from police-wiretapped telephone conversation, that the prosecution says proves the direct involvement of Levo Chan Weng Lin... END_OF_DOCUMENT_TOKEN_TO_BE_REPLACED