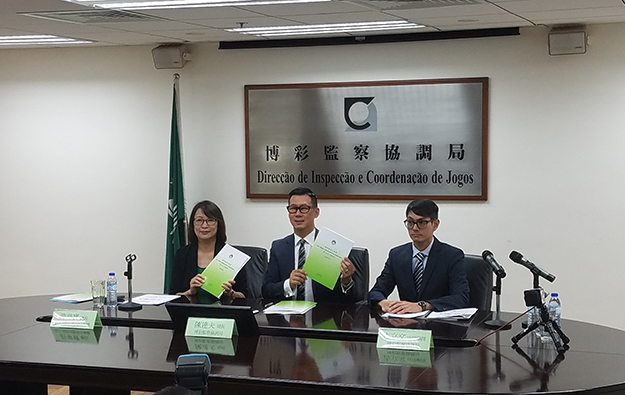 The terms of the initiative from Macau’s Gaming Inspection and Coordination Bureau – also known by its Portuguese acronym DICJ – were announced during a Tuesday press conference (pictured). Staff not directly involved with gaming operations – including administrative staff, food and beverage outlet workers and those connected to surveillance operations or entertainment – would be exempted from the ban.

The proposal states that any designated casino worker detected in a local casino outside working hours would be liable to a fine of between MOP1,000 (US$125) and MOP10,000. The ban also covers slot parlours.

The gaming regulator will now conduct a one-month public consultation on the ban proposal starting from Wednesday (September 27). The liaison effort will also cover the issue of any underage people that might be detected on casino floors in the city’s casinos: patrons must be 21 or over to enter the gaming zones. Also up for discussion is how to handle any situation where a person already barred from entering Macau gaming facilities actually succeeds in winning money at tables or slots, but is subsequently identified as a banned individual.

The city’s civil servants are already banned by dint of their professional role, from entering casino floors. The exception is a brief period during the Chinese New Year holiday season. Macau gaming operators already have contractual bans on their own staff gambling on company premises.

Representatives from DICJ had said in May 2016 that the local authorities were mulling rules banning gaming workers from being on casino floors outside work hours. At the time, two Macau gaming labour groups said they supported the measure.

In a Tuesday press release, DICJ noted that – according to Macau’s “Central Registry System of Individuals with Gambling Disorder” – the majority of the Macau-employed people seeking government help were either “casino dealers” or “gaming sector workers”. The latest available data indicate 13.60 percent of the Macau-employed people registered in that database in 2016 were “casino dealers”; and an additional 10.04 percent were “gaming sector workers”.

DICJ admitted in a document related to the public consultation that the incidence of gaming workers with gambling behaviour designated as problematic “could potentially be much more serious” than was indicated by the centralised registry data, as the latter recorded only self-reported cases.

The casino regulator is also proposing streamlined proceedings to handle instances where those under 21 are detected on the city’s casino floors. DICJ stated that was because most people detected breaching the rule were tourists; the introduction of simplified proceedings would make handling of such cases more efficient and reduce related costs, it said.

Procedures currently are often only concluded after the suspected wrongdoer has left Macau, meaning the person has to be contacted in their home jurisdiction via post, DICJ said. The regulator admitted contacting suspects living outside of Macau was expensive, time consuming and often hard.

The DICJ proposal states its inspectors could – once someone under the age of 21 is detected inside a local casino – immediately fine that person. In such a case, the person – if admitting wrongdoing – would be liable to a fine of MOP1,000, to be paid voluntarily within 15 days. In the event of a repeated infringement, the streamlined proceedings would not be applicable.

DICJ’s latest proposed update to regulation additionally clarifies that the local authorities can seize any wager or set of casino winnings possessed by people barred from entering gaming floors – once they have been detected as persons in breach of that existing ban. Under the proposal, the seized wagers or casino winnings would be temporarily deposited with the relevant casino’s cage staff until related legal proceedings were completed.

The casino at the Jeju Dream Tower resort (pictured), in the capital of the South Korean holiday island of Jeju, recorded KRW18.5 billion (US$14.5 million) in gaming revenue for the three months to... END_OF_DOCUMENT_TOKEN_TO_BE_REPLACED