Macau security boss on gaming commission a plus: govt 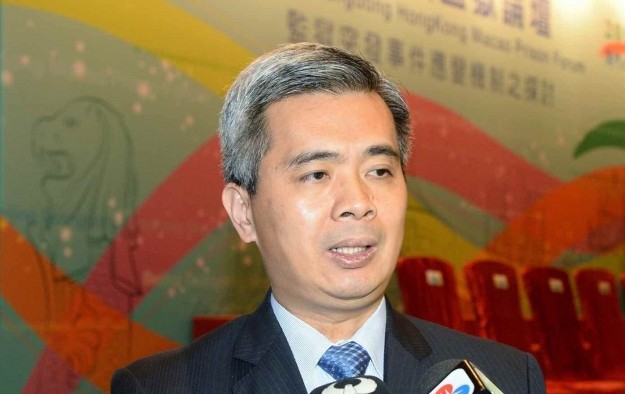 The appointment of Macau’s Secretary for Security, Wong Sio Chak (pictured), to the city’s Gaming Commission is a “positive” regarding the regulating of the gaming industry and the maintenance of public security, “especially when the industry is developing in a new phase,” said the Secretary for Economy and Finance, Lionel Leong Vai Tac in comments on Saturday.

The phrase “developing in a new phase” is understood to refer to policies of the Macau authorities and China’s central government that seek to diversify the local economy beyond its reliance on casino gambling, and to moderate the pace of growth in the casino gambling that still goes on there.

Mr Leong was speaking on Saturday on the sidelines of the inauguration for a new grouping called the Macao Association of Young Employees in the Gaming Industry. Mr Leong was responding to questions from local media as to the significance of Mr Wong’s appointment to the Gaming Commission.

The commission’s purpose is to research gaming, draft gaming policy, and to monitor and create guidelines for the industry, according to the executive order that established the body. The role of chairman is taken by the chief executive of the city.

The city’s regulator of gambling operations undertaken in the city – the Gaming Inspection and Coordination Bureau – said on April 1 that total casino gross gaming revenue (GGR) for the first three months of 2016 had contracted by 13.3 percent year-on-year. For the whole of 2015, such revenue fell 34 percent year-on-year, weighed down said investment analysts by factors including China’s anti-corruption drive and the mainland’s slowing economy.

Mr Leong also added in his Saturday comments that the government would continue to communicate with representatives from the city’s VIP gaming promoters – regarding the review of the capital rules for junkets and the vetting of the backgrounds of those wishing to be gaming promoters.

The addition of Mr Wong to the Gaming Commission means that four out of Macau’s five governmental secretaries now sit on the body. The only secretary not on the body is the Secretary for Social Affairs and Culture, Alexis Tam Chon Weng.

All eight members of the body  are from the government and public administration sector. The head of the gaming bureau is one of them.

The government created the Gaming Commission in 2000. It played a big part in the liberalisation of Macau’s gaming industry.

The body was totally revamped in February 2010, after being dormant for some time. The government changed the membership of the commission, appointing a greater number of senior officials than had previously been on board. However, since that change, according to a review by GGRAsia of publicly available sources, the body has neither held any meetings that made the news nor published any public reports.

The imminent return of package tours from mainland China will not only help boost Macau’s tourism businesses, but is also expected to help casinos gain more foot traffic in their mass gaming... END_OF_DOCUMENT_TOKEN_TO_BE_REPLACED