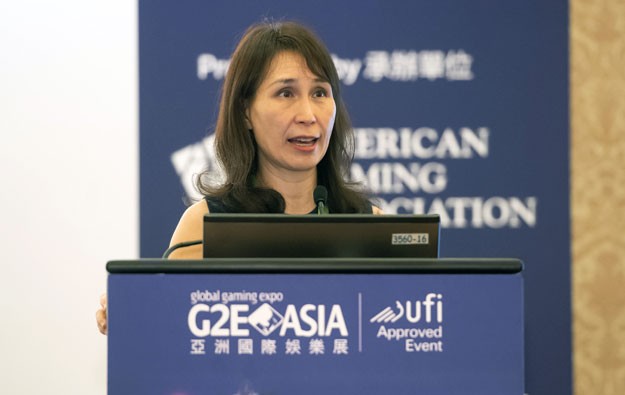 Macau needs to move upmarket and increase the length of stay of visitors, said Daisy Ho Chiu Fung (pictured), chairman and executive director of Macau casino operator SJM Holdings Ltd in her keynote speech on Tuesday, the first day of Global Gaming Expo (G2E) Asia 2019. The event is a conference and trade show on the regional casino industry.

“Because of Macau’s limited land area, attracting more visitors without experiencing ‘over-tourism’ is a growing challenge,” she told conference delegates.

Ms Ho said recent statistics on visitor arrival growth rates indicated Macau was likely to have an aggregate of 40 million tourists this year. “Not too long ago” that would have been considered Macau’s “maximum carrying capacity,” she stated.

The title of her keynote was “Asian markets perspectives: opportunities and threats”. Ms Ho confined her remarks to Macau and its role in China’s Guangdong-Hong Kong-Macau Greater Bay Area initiative.

As well as mentioning the role of her father, former monopolist in the Macau gaming market, Stanley Ho Hung Sun, and the work he had done on Macau infrastructure during his 40-year run as sole casino services provider, Ms Ho said Macau had developed a knack of “reinventing” itself “every 50 years or so”.

In the current context, that could help diversify Macau’s economy beyond its dependence on casino business, by becoming a tourism education hub regionally and internationally, and also as a so-called “platform” linking China and Chinese businesses with those in Portuguese-language countries and beyond.

But she warned against complacency locally with regard to what she termed the special privileges that had been granted to Macau by China’s central government.

GGRAsia asked Ms Ho on the sidelines of the event, how it would be possible for Macau to move its tourism upmarket. Macau received circa 35.8 million visitors last year – most of them residents of either mainland China or Hong Kong.

A number of investment analysts has mentioned that the opening in October last year of the Hong Kong-Zhuhai-Macau Bridge spanning the Pearl River Delta and providing a direct road link between Hong Kong International Airport and Macau, had only increased the number of mass-market tourists. That market component tends to stay for the shortest amount of time and spends the least, according to some research.

Ms Ho told us on the sidelines: “To move upmarket means to try new things [tourism source markets] beyond mainland China. Macau is the first stop for those that have not travelled outside of China, because of similar culture and close geographic proximity.”

The Macau government announced on Tuesday tightening of its Covid-19 testing requirements for front-line casino staff, halving the interval between nucleic acid tests to every two days, from every... END_OF_DOCUMENT_TOKEN_TO_BE_REPLACED