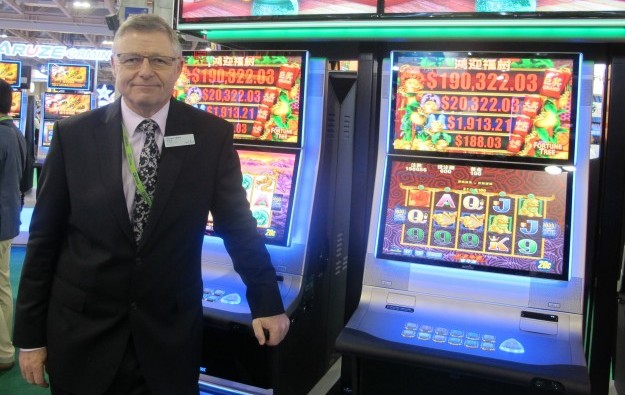 “With the changes that we have seen recently in Macau, we believe that gives us a greater responsibility to ensure that the products that we are talking about to our customers can really, really work out for them,” Mr Kelly told GGRAsia during the Global Gaming Expo (G2E) Asia trade show.

The three-day event, taking place at Venetian Macao, ends on Thursday. Around 180 firms are exhibiting at the show, including several electronic gaming machine manufacturers.

“We see, as a result of the changes [in the Macau market], mass becoming more important” to casino operators, the Aristocrat executive stated.

“The opportunity for our customers and us particularly in Macau is that casino customer participation in slots is relatively low as a percentage compared to many other markets,” Mr Kelly said.

Slot revenue accounted for 4.5 percent of Macau’s overall GGR in the first quarter of 2015, up from 3.9 percent in the year-prior period.

Despite the downturn in Macau, the number of casino properties in Asia is set to continue increasing in the near future. Aristocrat is “heavily involved” in several of the upcoming casino openings and floor expansions taking place across the region, Mr Kelly stated.

The next new casino inauguration in Asia is Galaxy Macau’s Phase 2, operated by Galaxy Entertainment Group Ltd. Its opening is scheduled for next week.

When Galaxy Macau Phase 1 opened in May 2011, Aristocrat said it had achieved a floor share of about 70 percent, which it claimed at the time was “a record for any casino opening in Macau”. Mr Kelly did not provide floor share estimates for Aristocrat at Phase 2. He said: “I am sure we will be playing a very important part in their business.”

During the Hyperlink feature on ‘Fortune Tree’, a cumquat tree reveals red packets and the player selects the red packets to award one of four jackpot levels.

“The feedback on Fortune Tree has been very good,” Mr Kelly told us.

“We also have had some very nice feedback on what we are doing with our so-called ‘Entertainment Series’ in terms of how we are broadening our portfolio and more directly addressing the mass market than our content may have done in the past,” he added.

In addition, Aristocrat is deploying the first units of its latest cabinet, the Helix, in Asia. Mr Kelly said he expects the distinctive features of Helix – including the LED backlit full HD displays and rear surface ambient lighting – will play well with Chinese gamblers.