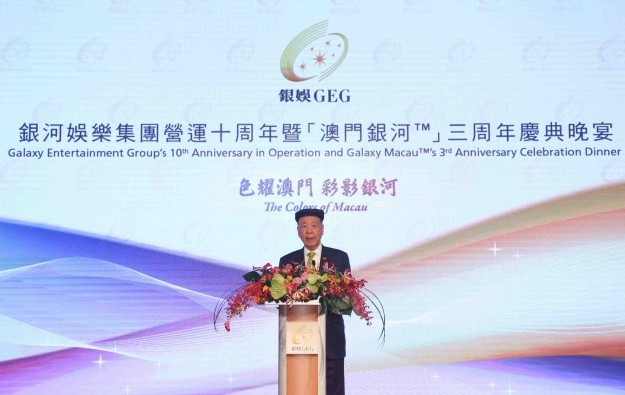 An estimated US$5.4 billion was erased from the fortune of Lui Che Woo (pictured), founder and chairman of gaming operator Galaxy Entertainment Group Ltd. His net worth dropped from an estimated US$13.4 billion in January 2015 to US$8.0 billion in January this year, Forbes said. Mr Lui slipped from fifth to seventh place on Forbes’ list. In 2013, Mr Lui was ranked second in the list, with a net worth of US$21 billion.

Galaxy Entertainment’s stock price fell 44 percent in 2015 from its value as of end-2014, according to data compiled by GGRAsia. Prices of shares in Macau’s six casino operators dropped between 30 percent and almost 60 percent during last year.

Pansy Ho Chiu King, co-chairperson of casino operator MGM China Holdings Ltd, saw her personal fortune slip by an estimated US$1.4 billion in 2015, to US$3.6 billion, according to Forbes. Ms Ho, a daughter of Macau casino tycoon Stanley Ho Hung Sun, went from 12th place in the 2015 Forbes list to 19th place in January 2016.

She owns a stake of about 27.4 percent in MGM China, according to the firm’s 2014 annual report. Ms Ho is also managing director of Hong Kong-listed shipping and property conglomerate Shun Tak Holdings Ltd.

One of Ms Ho’s siblings, Lawrence Ho Yau Lung, co-chairman of Melco Crown Entertainment Ltd, saw his net worth decline by about US$0.4 billion, to US$1.57 billion, according to Forbes. Mr Ho dropped from 31st place in 2015 to 41st in the 2016 list of Hong Kong’s wealthiest people.

Angela Leong On Kei, fourth consort of Stanley Ho and an executive director of casino operator SJM Holdings Ltd, saw her net worth drop by US$0.3 billion, to US$1.5 billion, according to Forbes. She went from 36th place to 44th position.

The latest ‘Hong Kong’s 50 Richest People’ list by Forbes included other billionaires that, while owning diversified holdings, had a sizeable exposure to Macau’s casino sector. But the diversity of their portfolios helped absorb losses coming from their gaming interests in 2015.

Cheng Yu Tung remained the highest-placed among entrepreneurs with sizeable casino interests on ‘Hong Kong’s 50 Richest People’ list. His net worth held stable at US$15 billion. He remained in third place.

The businessman is perhaps best known to the public for heading the retail chain Chow Tai Fook Jewellery, part of Hong Kong-listed Chow Tai Fook Jewellery Group Ltd. Mr Cheng is a long time business associate of Stanley Ho, with an indirect stake in SJM Holdings. He recently has shown interest to expand his gaming interests to South Korea, Vietnam and Australia, according to media reports.

Emperor International Holdings Ltd’s Albert Yeung Sau Shing returned to the Hong Kong Forbes list after missing the cut in 2015. His net worth is now estimated at US$1.25 billion, putting him in spot 46 of the list. His business interests include Emperor Entertainment Hotel Ltd, owner and operator of Macau casino property Grand Emperor Hotel.

Li Ka Shing, founder and chairman of Hong Kong-listed Cheung Kong Property Holdings Ltd, retained the top spot on the latest Forbes ‘Hong Kong’s 50 Richest People’ list. With a net worth of US$31.3 billion, the 87-year old tycoon is Hong Kong’s richest for the 18th year in a row. Mr Li has several business interests in Macau but no gaming-related investment.

Singapore has the potential to be a “top choice” for Chinese outbound travellers, once the country reopens and eases travel restrictions associated with the Covid-19 pandemic, suggested... END_OF_DOCUMENT_TOKEN_TO_BE_REPLACED