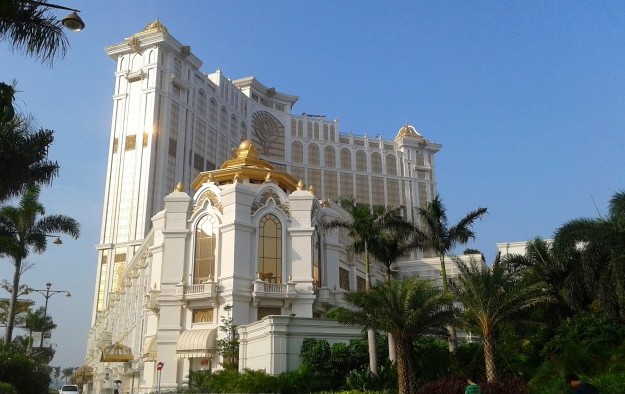 Nomura expects the “firmer second quarter earnings trend” for Macau casino operators to continue into the third quarter. The Japanese finance house forecasts industry earnings before interest, taxation, depreciation and amortisation (EBITDA) “to rise by 3 percent quarter-on-quarter to US$1.4 billion”. That however would still be a decline of 37 percent year-on-year, it said in a note on Monday.

The brokerage said it estimated Galaxy Entertainment Group Ltd to “deliver the strongest EBITDA growth of 11 percent quarter-on-quarter driven by normalisation of VIP win rates and a further ramp up of Galaxy [Macau] phase two”.

Galaxy Entertainment opened on May 27 its Galaxy Macau Phase 2 (pictured) and Broadway Macau properties on Cotai.

“We expect Wynn Macau [Ltd] and MGM China [Holding Ltd]’s 3Q EBITDA to be flat quarter-on-quarter whereas for Sands China [Ltd] and SJM [Holdings Ltd] we expect EBITDA to be down 4 percent and 12 percent quarter-on-quarter as second quarter was helped by high VIP win rates of 3.38 percent and 3.25 percent respectively (versus the theoretic average of 2.85 percent),” wrote analysts Richard Huang, Stella Xing, Harry Curtis and Kelvin Wong.

Analysts at UBS Securities Asia Ltd said last month they expected mass GGR to grow by about 4 percent quarter-on-quarter in the third quarter, “marking the first sequential increase since the first quarter 2014”.

The official government numbers on the VIP-mass revenue split for the three months to September 30 – expressed on a quarterly rather than monthly basis – will be available later this month.

Nomura also noted that visitor numbers to Macau “are improving”, as shown by the increase in the number of mainland visitors during China’s Golden Week holiday in early October.

“We expect travel demand to Macau to improve after the opening of Studio City on October 27 and Wynn Palace in March 2016 which we believe will drive a 9 percent increase in mass GGR in 2016,” Nomura said.

The US$3.2-billion Studio City – developed by casino operator Melco Crown Entertainment Ltd – is likely to open with an initial allocation by the government of up to 250 new-to-market gaming tables, above market expectations, several analysts said last week.

While there are signs of stabilisation in the mass-market segment, “the VIP segment is not out of the woods yet, in our view, with revenues in September sinking to the lowest level since 2010,” Nomura said in Monday’s note.

The Japanese brokerage said VIP growth trends in the Macau market “remain a concern”, namely because of the “theft at Dore…, potential exiting of Neptune … and enhanced supervision of junkets likely to have an impact on future growth”.

Macau recorded 965 “gaming-related” crimes in full-year 2022, down 29.7 percent on the 1,372 identified in the previous year, according to the latest statistics published on Tuesday by... END_OF_DOCUMENT_TOKEN_TO_BE_REPLACED