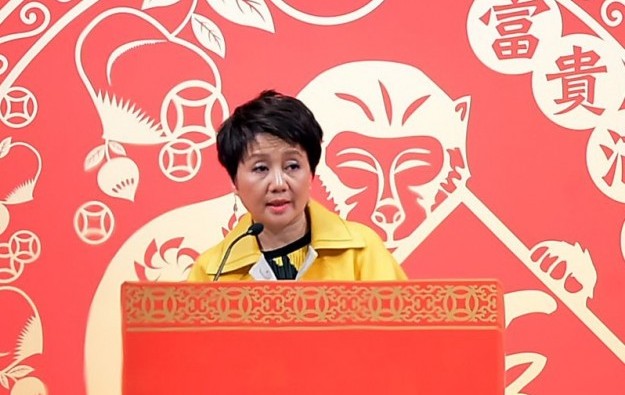 Angela Leong On Kei (pictured), an executive director of Macau casino operator SJM Holdings Ltd, has criticised the Macau government’s recent confirmation that it would stick to its current formula in capping – until at least the end of 2022 – the number of new gaming tables in Macau casinos.

Ms Leong, the fourth consort of SJM Holdings’ founder Stanley Ho Hung Sun, and also a Macau legislator, said the adherence to the current formula of the table cap policy would “not be able to cope with future needs” of the industry.

The current cap aims to limit live dealer table numbers to 3 percent growth compounded annually, until the end of 2022, from a base of 5,485 tables recorded at the end of the fourth quarter in 2012. The effect of the cap has been to limit to 250 the number of new tables allowed in recently-opened multibillion U.S. dollar casino resorts on Cotai.

The intention to stick to the current table cap formula – devised four years ago under very different market conditions – was reiterated a fortnight ago by the government. The pledge came as the administration outlined its proposed blueprint for Macau’s economic and social development between 2016 and 2020 – known as the Five-Year Development Plan.

The table cap mechanism was originally introduced for what the government termed as the control of the development of the casino industry.

A number of investment analysts have characterised that as control of the growth of casino gross gaming revenue (GGR). But since the cap was introduced in January 2013, other factors – including China’s anti-graft campaign and its economic slowdown – have contributed to a contraction in gaming revenue, they say. That, add the analysts, has helped to break the linkage between fresh-to-market tables and expansion of Macau casino GGR. A number of analysts have said the Macau casino story has now turned into one concerning operational efficiency.

Nonetheless Ms Leong – while stopping short of calling for the scrapping of the cap – defended the right of casino operators to lobby for some flexibility in the cap’s formula.

She was speaking on Wednesday, when the Macau government met with members of the Legislative Assembly to canvass their opinions on the city’s Five-Year Development Plan.

At the meeting, Ms Leong said she hoped the government would – when considering the findings of its “mid-term review” of the casino industry – consider “a flexible adjustment” to the number of  live dealer gaming tables allowed in Macau casinos.

In the first quarter of 2016, there were 6,087 gaming tables in the city’s casinos, data from the Gaming Inspection and Coordination Bureau (DICJ) show.

During the opening three months of 2016, SJM Holdings operated an average of 369 VIP gaming tables, a sharp decline from the 530-unit average recorded a year earlier, according to the firm’s first-quarter unaudited earnings. The casino operator had an average of 1,298 mass-market gaming tables in the first quarter of 2016, up by 7.4 percent in year-on-year terms.

Commenting regarding the proposed Five-Year Development Plan, Ms Leong said the government should make a “clearer goal” for the Macau gaming industry’s mid- and long-term development, in order for the sector to remain competitive in the current “adjustment phase” of the local economy.

“Adjustment phase” is a term used by the local and central authorities to indicate policies and announcements designed to reduce the Macau economy’s dependence on hardcore casino gambling, and in particular the high-stakes variety.

Ms Leong did not elaborate on the ways in which the government might set “clearer goals” for the casino industry.

A medium-term goal for the gaming industry as mentioned in the Five-Year Development Plan is for non-gaming revenue at Macau casino resorts to rise as a proportion of all revenue they generate. The target is that non-gaming should account on average for at least 9 percent of all such revenue by 2020, from what the government estimates was 6.6 percent in 2014.

Macau’s Legislative Assembly (pictured) will conduct on Monday (January 24), during a plenary session, a formal first reading of the draft bill to amend the city’s gaming law, according to a... END_OF_DOCUMENT_TOKEN_TO_BE_REPLACED