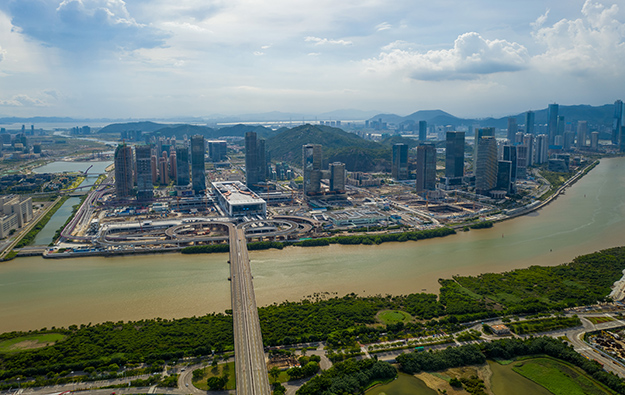 Macau took a step closer to economic integration with the neighbouring mainland territory of Hengqin island (pictured) on Tuesday afternoon, when a boundary-crossing facility between the two places – known as Hengqin Port, part of which comes under Macau jurisdiction – officially opened its passenger-processing area.

Also on Tuesday, a railway spur line from Zhuhai – Macau’s nearest mainland neighbour in Guangdong province – to Hengqin, was also opened to passengers.

Macau’s Chief executive, Ho Iat Seng, has pledged to have greater cooperation between Guangdong and land-constrained Macau, regarding economic development of the two places in general, and of Hengqin in particular.

The latter island had also been touted – prior to the Covid-19 emergency – as Macau’s partner for two-centre holidays packaged to consumers. A variety of tourism infrastructure – including themed attractions – has been developed on Hengqin in recent years.

Kok Fong Mei, director of Macau’s Public Security Forces Affairs Bureau, affirmed at a Tuesday press conference, the daily “passenger” capacity of the new crossing. Currently, only a small number of people is allowed to use their private vehicles for trips between Macau and Hengqin.

Hengqin Port’s facilities – including the passenger part – will be open round-the-clock. With effect from Tuesday, Hengqin Port’s functions replace the immigration checkpoint that had been operated at the Lotus Bridge on the Macau side, near the Studio City casino resort on Cotai.

Hengqin’s Mr Yang said the new crossing would become a “highly efficient” transport hub to enable “rapid connection” of the public transport systems between Zhuhai and Macau, including the public buses and several rail links – one planned and one already realised.

A trip from Gongbei, to Hengqin’s Chimelong-branded theme park and resort, takes 15 minutes on the Urban Rail Transit system, according to Chinese-language newspaper Macao Daily News.

The second phase of Zhuhai Airport Urban Rail Transit will connect Zhuhai Airport directly to Hengqin. That leg is due to be completed in 2023, according to Chinese-language media reports.

Mainland China authorities approved in March a law enabling Macau to have jurisdiction over Hengqin Port’s passenger-clearance facilities, namely a total area of 66,428 square metres (715,025 sq feet). It includes the passenger clearance terminal, the surrounding road traffic links, and a transport hub, as well as part of an access road to the Lotus Bridge that spans the water channel separating Hengqin island from Macau.

Bloomberry Resorts Corp – the operator of Solaire Resort and Casino (pictured) in the Philippine capital Manila – on Wednesday announced in a series of filings, that an aggregate of just over 7.9... END_OF_DOCUMENT_TOKEN_TO_BE_REPLACED