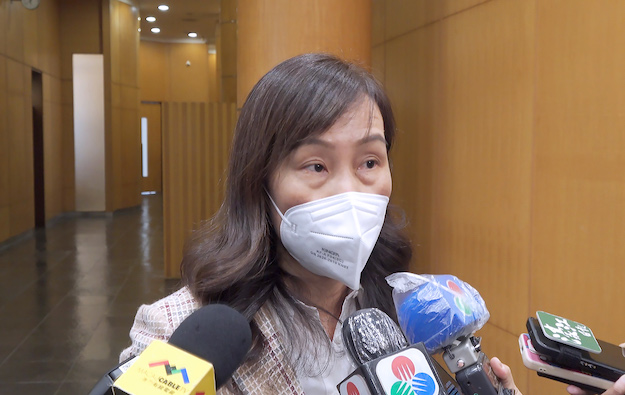 The Macau government secretary in charge of health matters said on Tuesday that the city authorities were studying a way to ease further the tough Covid-19-related restrictions that have been in place for nearly three years.

The change was possible due to the fact that the present Omicron variants of the disease were generally considered less dangerous to human health than earlier versions, with many recent patients showing no or few symptoms, said Elsie Ao Ieong U (pictured), Secretary for Social Affairs and Culture. She was speaking to reporters on the sidelines of a plenary meeting of the city’s Legislative Assembly.

She added that local policies against the disease would be progressively eased and that Macau would “gradually reopen”. The city’s tourism industry and its casino sector have been severely affected by what have until now been tough anti-Covid measures in its main feeder market, mainland China, as well as in Macau itself.

She admitted that as a result, Covid-19 “will gradually spread among the community,” and that Macau would see “an increase in the number of cases”.

But she stressed the government would neither abandon Covid-19 prevention and control work nor allow the disease to spread unchecked in the community.

“We need to be ready as we will continue to see [Covid-19] cases in the community, but we will act in line with the plans we have in place,” she noted.

Ms Ao Ieong mentioned that if more than 5,000 community infections were detected, the city still planned to take control measures including a ban on indoor dining at restaurants and a ban on the holding of large-scale events.

The official stated nonetheless that it “would be impossible” for Macau to remain shut to the outside world, and that the local Covid-19 countermeasures would follow the Chinese mainland’s policies.

She observed that on the mainland, the health authorities were gradually relaxing restrictions. As a result, Macau had the opportunity to follow suit.

Nonetheless, the Macau authorities have announced tougher rules for arrivals from mainland China, after a number of visitors including some air travellers, tested ‘positive’ for infection after initially testing ‘negative’.

Macau’s Novel Coronavirus Response and Coordination Centre stated on Tuesday that the city had identified 19 Covid infections as of midnight on Monday.

International casino operator Las Vegas Sands Corp has been ranked as the most sustainable firm in the global casino sector, according to the 2023 edition of the S&P Global Sustainability... END_OF_DOCUMENT_TOKEN_TO_BE_REPLACED