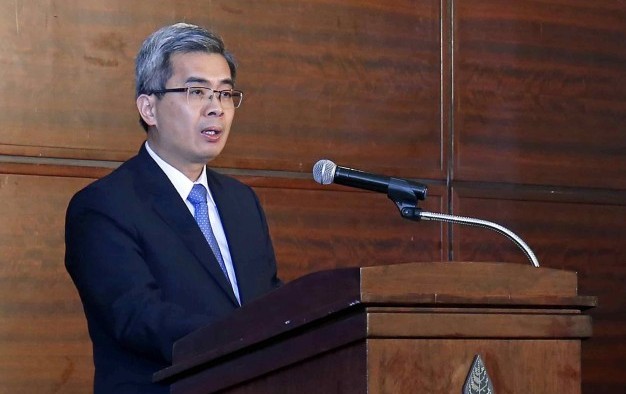 Macau’s Secretary for Security, Wong Sio Chak, said on Monday that his departments would continue to communicate with the city’s casino regulator, the Gaming Inspection and Coordination Bureau (DICJ), to study ways to combat what he referred to as “side betting”.

The secretary made the comment at a Monday press briefing discussing the city’s crime statistics for the first quarter this year. Mr Wong stated that his office currently does not have any official statistics regarding the crime of “side betting” because of its “hidden nature” and the difficulty of obtaining usable evidence concerning the activity.

The Macau government’s “mid-term” review report of the local casino industry published at the start of May, mentioned the likelihood of tighter regulation of VIP gaming promoters at the city’s casinos, including potentially the use of undercover investigators to combat what the report referred to as “side betting”. In the Macau context, this usually means “the multiplier”.

The multiplier is an illegal practice defined in the Macau government’s industry review report as “the VIP room operator’s secret arrangement with the client that both parties will agree to magnify by a few times – for instance 10 times – the bet on the table”. The review described the multiplier as “greatly restricting government taxation and seriously disruptive to social order”.

Speaking to reporters on Monday, Mr Wong said his office remains “open” on whether to adopt the use of undercover investigators to combat the multiplier. That possibility was mentioned in the “mid-term” review report.

The secretary also noted that what the government refers to as “the adjustment” in Macau’s gaming industry – usually taken by outsiders as a reference to the two-year downward trend in casino gross gaming revenue – had so far not had any negative impact on the city’s security, nor had it created what Mr Wong referred to as “irregularities” in triad activities.

But according to official data released by Mr Wong’s office, there was a rise in the number of gambling-related crimes in the first three months of this year.

In the January to March period, the number of cases of gambling-related crimes reported to, and investigated by, the police totalled 368 cases, representing an increase of 11.2 percent year-on-year, the official data indicated.

In the quarter, a total of 89 cases of unlawful detention – i.e., where a person is held against his or her will by someone not legally authorised to do so – were recorded, reflecting an increase of 32.8 percent year-on-year. Such cases are typically associated in Macau with loan sharking connected to gambling, the city’s authorities have said.

Usury cases – unlawful lending of money – in the period, increased by 55.9 percent year-on-year to 106 cases, according to official data released on Monday.

While cases of unlawful detention and of usury had fallen when judged quarter-on-quarter, the fact that both categories of offence had risen year-on-year was a ground for the security forces not to be complacent, the secretary’s office concluded. The office also noted on Monday that it would launch more efficiently targeted crime prevention measures to combat illegal detention and usury.

Most of the victims and suspects involved in the illegal detention and usury cases were not Macau residents, the secretary’s office said in its report, which was read out at the media briefing.

Explaining the year-on-year rise seen in gambling-related crimes, Mr Wong stated it was partly due to “better enforcement of the law”. Most of the cases took place inside casinos, and the police saw no signs that such criminal activity was spreading beyond the walls of the casinos.

His office noted that in the first quarter, gaming-related cases involving a total of 424 suspects had been sent to the Public Prosecutions Office, up by 17.5 percent year-on-year.

Macau’s casino gross gaming revenue (GGR) for the first five days of February is estimated at MOP1.9 billion (US$235.1 million) – or MOP380 million per day – a level that suggests a “45... END_OF_DOCUMENT_TOKEN_TO_BE_REPLACED