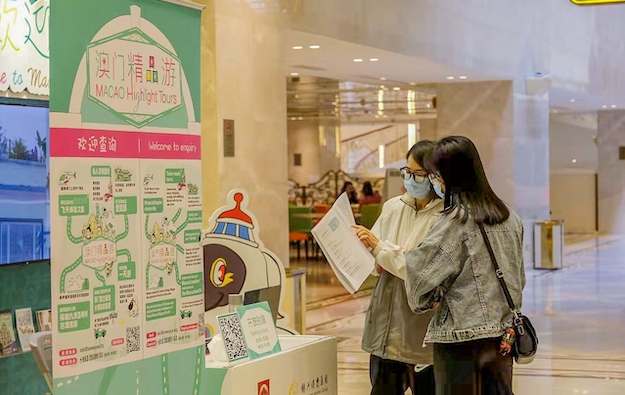 Macau began on the Chinese mainland on Sunday the latest promotional drive for its tourism industry, after the daily tally of inbound visitors to Macau reached 18,620 on Saturday.

It was the highest level since a quarantine rule was lifted on August 3 for outbound travel from Macau to neighbouring Zhuhai in Guangdong province.

The data was given by the Macao Government Tourism Office (MGTO). The previous Saturday, August 20, Macau had something over 17,000 visitors.

MGTO said it held on Sunday the first of a sequence of events on the Chinese mainland to promote Macau as a tourist destination. A promotional roadshow called “Experience the Unlimited Fun in Macau” started in Zhuhai that day, and is due to tour a total of nine Guangdong cities that are part of the Guangdong-Hong Kong-Macau Greater Bay Area.

Another Macau roadshow – for eastern China – called “Shandong-Qingdao Macau Week” is due to start in early September, “showcasing Macau’s diverse ‘tourism +’” offer to consumers, and “aiming at attracting mainland tourists for the upcoming National Day ‘Golden Week’ and other holidays,” said MGTO in a press release, referring to an important holiday period encompassing October 1.

China’s State Council has designated October 1 to 7 inclusive as the period for this year’s autumn Golden Week.

Macau has made a number of modest steps recently in the direction of travel easing, but it is also subject to other factors, including Covid-19 outbreaks on the mainland – the city’s main source market for tourists – and countermeasures applied on that side of the border regarding outbound trips to Macau.

Starting from August 18, those people eligible for entry to Macau – arriving in the city via either Hong Kong, Taiwan or overseas places – are no longer required to show proof of Covid-19 vaccination, according to a Macau Health Bureau announcement.

Macau casino GGR for July – which stood at MOP398 million (US$49.2 million) – was the lowest monthly tally since currently-published records by the city’s authorities, dating back to 2003.

Macau casino floors were only running for 19 out of the 31 days of the month. A shutdown from July 11 to July 22 inclusive, was a part of countermeasures for a Covid-19 local outbreak that was first declared on June 19, with local cases recorded up to late July.