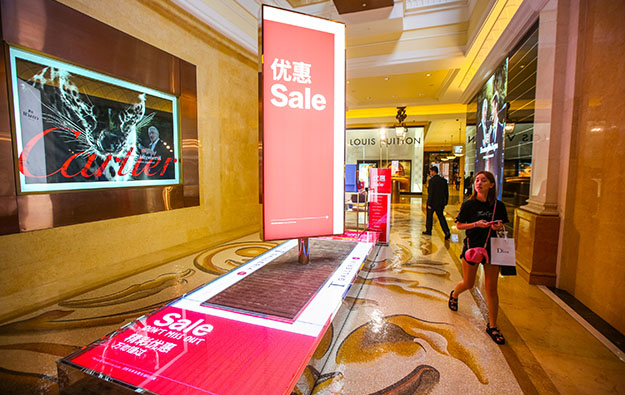 Macao’s tourist price index fell by 0.22 percent year-on-year in the fourth quarter of 2019, according to the latest data released on Tuesday by the city’s Statistics and Census Service.

The statistics bureau said the year-on-year decrease in the tourist price index was mainly related to “lower hotel room rates” and “falling prices of handbags and clothing”. Other categories, such as charges for restaurant services and sales of gold jewellery and local food products, recorded an increase during the three months to December 31, offsetting part of the overall decrease seen in the period.

The data shows that the price index covering accommodation recorded a fall of 2.39 percent compared to the previous year, while the price index of clothing and footwear was down by 5.87 percent percent year-on-year.

The latest released data from Macao Government Tourism Office showed a drop of 2.4 percent in the room rate of the city’s three-star to five-star hotels year-on-year to MOP1,401.70 (US$174.98) for December, while a rise of 2.0 percent and a fall of 0.3 percent were recorded for November and October respectively. The figures were published by the Macau Hotel Association.

Compared to the previous quarter, the tourist price index of the city increased by 7.36 percent, due to higher hotel room prices. The accommodation price index rose by 27.71 percent quarter-on-quarter, accounting for higher hotel room rates during the National Days holidays in early October, the Macao Grand Prix in mid-November, as well as the Christmas holiday period, said the statistics bureau.

The 2019 annual price index declined by 0.37 percent year-on-year, mainly due to the lower hotel room rates throughout the year and a price drop of handbags and clothing compared to full-year 2018, showed Tuesday’s data.

The imminent return of package tours from mainland China will not only help boost Macau’s tourism businesses, but is also expected to help casinos gain more foot traffic in their mass gaming... END_OF_DOCUMENT_TOKEN_TO_BE_REPLACED