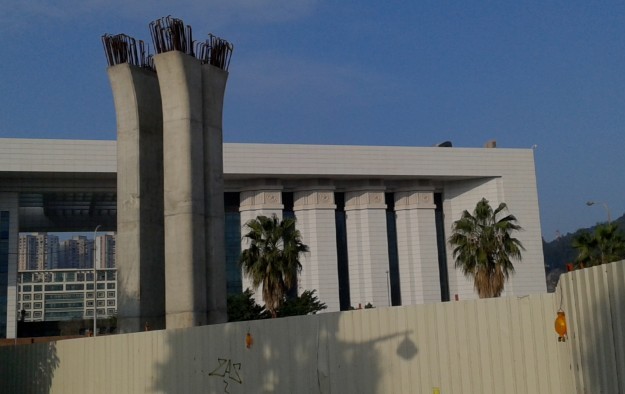 Two of Macau’s major transport infrastructure projects are facing further delays. But people in the casino industry are likely to have factored in those hold ups when making their forecasts for the sector’s growth, says an investment analyst covering the gaming industry.

Macau’s Secretary for Transport and Public Works, Raimundo do Rosário, this week said the government could not say with precision when the under-construction light rail transit system, known as LRT and designed to move visitors and locals around the city, would be operational.

Mr Rosário said the construction timeline for the system’s Taipa section had been revised. That section of the project (pictured), connecting all the Cotai resorts, will only be completed between 2017 and 2018, he added. There is no timetable yet for construction work to start on the Macau peninsula section.

Construction work for the rail depot in Taipa has been very slow, Mr Rosário said, adding that it could result in further budget overruns. The government official was speaking to reporters after a meeting with members of the city’s Legislative Assembly earlier this week.

According to a recent report from Macau’s public spending watchdog, the Commission of Audit, the budget for the first phase of the rail system had reached MOP14.3 billion (US$1.8 billion) in September 2012. That was up from the estimated MOP4.2 billion when the project was announced in 2007.

Another major transport infrastructure scheme is also facing delays. The Hong Kong-Zhuhai-Macau Bridge might be delayed until 2017 or even later, said a senior official for the government of Guangdong province, which has a partnership with the Macau and Hong Kong authorities in overseeing the project.

“I can just say it’s very, very difficult to have the bridge put into use by 2016,” Li Chunhong, the director general of Guangdong’s Development and Reform Commission, said at a press conference on Tuesday, according to the Hong Kong-based newspaper South China Morning Post.

The bridge project, with an estimated total cost of HKD133 billion (US$17.2 billion), has been hit by numerous technical challenges, Mr Li was quoted saying.

Investment analysts have said that both projects would be a catalyst for the city’s casino industry next year, as new projects on Cotai are set to open between this year and 2017.

“Any infrastructure delays are not ideal, but I think a lot of people close to the market expected some level of delay on both projects,” said Christopher Jones of Union Gaming Group LLC.

“We already know that a handful of [new Cotai] projects have already been delayed until at least mid-2016,” Mr Jones told GGRAsia, citing the examples of Wynn Palace, the Parisian Macao and MGM Cotai. “So assuming the bridge opens in early 2017, it’s a small window [of opportunity], one where the operators are ramping,” he added.

“I would add that perhaps one of the few silver linings of the market slowdown is that this [infrastructure delay] will likely have less of an impact as the region sees a more robust recovery in 2016; and 2017 will enjoy even greater performance as the benefits of infrastructure kick in,” said Mr Jones.

The Union Gaming analyst also mentioned the Pac On ferry terminal, located near the airport on Taipa Island and designed to give mass market tourists easy access to the nearby Cotai casino resorts.

“We expect the new Taipa ferry terminal to open, which will be a very important infrastructure improvement for the new properties opening later this year and in 2016,” said Mr Jones.

Macau’s Legislative Assembly (pictured) will conduct on Monday (January 24), during a plenary session, a formal first reading of the draft bill to amend the city’s gaming law, according to a... END_OF_DOCUMENT_TOKEN_TO_BE_REPLACED