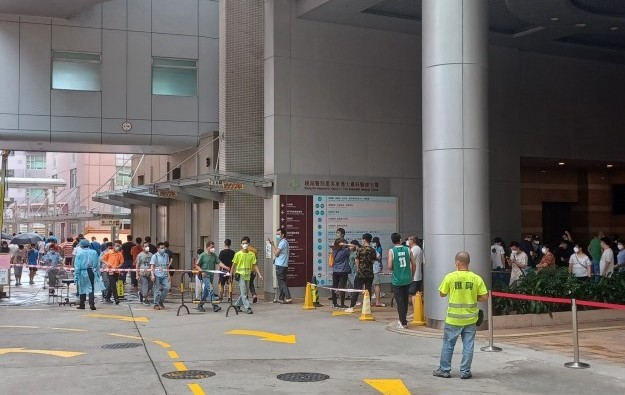 The Macau government announced on Thursday the cancellation of a plan for a nucleic acid test certificate requirement with 48 hour validity, for casino staff, casino customers and official visitors to those places; and construction workers attending sites. It had been aimed to prevent the risk of spreading Covid-19, and was to have been a condition of their entry to those places. The guideline had originally been scheduled to take effect from 7am on Friday (July 1).

The cancellation of the plan is according to a press release issued by Macau’s Novel Coronavirus Response and Coordination Centre on Thursday afternoon.

Instead, casino staff, casino customers and visitors; and construction workers, are required to pass a rapid antigen test on each day of intended entry, and report the ‘negative’ test results to the authorities so that they show on their individual health declaration systems, the Macau Covid-19 task force said in its Thursday release.

“Even a nucleic acid test done on every two days can lower the [Covid-19] transmission risk in the workplace,” said the local task force in its Thursday press release.

But it conceded that the gathering of people at nucleic acid test stations in order to comply with the originally proposed guideline, could prove “adverse to the prevention of Covid-19 spread, considering the huge number of workers in the construction sector and casinos.”

The task force said in reaching its decision, it had taken into account the results of the recent citywide centre-based nucleic acid testing and the self-administered rapid antigen tests conducted by the public, and discussed the matter with other relevant government departments.

At Thursday afternoon’s press conference of the Novel Coronavirus Response and Coordination Centre, senior health official Leong Iek Hou expressed regret for the long waiting times for those that had sought testing prior to the originally-intended start of the nucleic acid test scheme.

Ms Leong said that the local authorities – as a “responsible government” – had made the policy adjustment immediately.

She added that while Macau’s daily nucleic acid test quota of 90,000 checks should have been enough for the various industrial sectors to have been covered, some people had turned up much earlier than their appointment time, possibly anxious to have their result as quickly as possible. This had led to a build-up of people at places including the test centre at the new Qingmao border crossing point with neighbouring Zhuhai in Guangdong province, and the Macau Federation of Trade Unions test site near the Border Gate.

Many workers had encountered difficulties either in the booking of a nucleic acid test at the paid-Covid-19 test stations, or encountered long queues for testing at the designated places, Ms Chao and Mr Leong respectively said.

The imminent return of package tours from mainland China will not only help boost Macau’s tourism businesses, but is also expected to help casinos gain more foot traffic in their mass gaming... END_OF_DOCUMENT_TOKEN_TO_BE_REPLACED