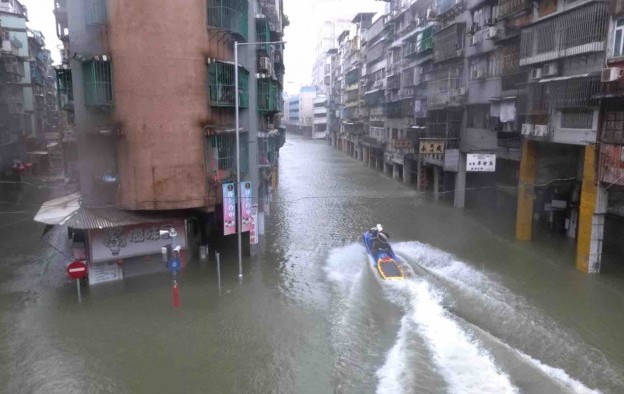 The Macau government has revised upward – by 12 percent – its estimate of total economic losses from September’s Typhoon Mangkhut, a category-10 storm that affected the city and led to the precautionary closure of all casinos; a first in the current six-operator market. The updated data includes a new figure for direct losses incurred by the city’s gaming industry.

The city’s Statistics and Census Service said in a Thursday press release that – after receiving feedback from questionnaires it had sent to “relevant government entities” – it was adjusting the aggregate loss figure to just under MOP1.74 billion (US$215.3 million). In November it had given a preliminary estimate of MOP1.55 billion.

Casinos in Macau were closed from late on Saturday, September 15, until the following Monday morning while Typhoon Mangkhut passed close to the city.

The statistics bureau put its updated losses for the city’s gaming industry from Typhoon Mangkhut at an aggregate MOP972 million, up 1.3 percent from the previous estimate.

The revised figure includes MOP960 million in “indirect” terms – understood to be a reference to loss of potential business due to the precautionary closure move and to accompanying disruption to public transport immediately before and after the weather event – and MOP12 million in “direct” losses. The latter was understood to relate to infrastructure damage such as broken fixtures and fittings on buildings.

Direct losses to the hotel sector from Mangkhut were put at MOP221 million. Direct losses for the “wholesale and retail trade, restaurants and similar establishments” were measured at MOP249 million under the updated numbers, with MOP59 million in indirect losses.

Nearly 12 months before, Typhoon Hato – the first category-10 tropical storm in half a century, and which affected Macau in August 2017 – caused greater infrastructure damage for the casino industry, the tourism sector and the city in general than did Mangkhut. Ten people also died as a result of the affects of Hato, whereas there were no reported fatalities linked to Mangkhut.

A revised government figure issued in February 2018 – which did not give a breakdown for the casino industry – estimated the total economic loss to Macau caused by Typhoon Hato was MOP12.55 billion, including MOP9.05 billion of direct losses and MOP3.50 billion of indirect losses.

On Wednesday there was a meeting between Macau’s Chief Executive, Fernando Chui Sai On, and officials tasked with improving the city’s preparedness for dealing with adverse events.

During the meeting – according to a press statement from the government – Mr Chui was given an update on several ongoing infrastructure improvements, including a sluice system at the Inner Harbour, flood barriers in low-lying coastal areas, rainwater interception drains, and storm-water pumping stations in the Inner Harbour of the Macau peninsula. The latter was one of the worst-affected areas in terms of flooding during the advent of Typhoon Hato and of Typhoon Mangkhut, although only one casino hotel complex – Ponte 16 – is located in that neighbourhood.

In late March Macau’s weather forecasting service warned that another super typhoon could affect the city this year.

Singapore has the potential to be a “top choice” for Chinese outbound travellers, once the country reopens and eases travel restrictions associated with the Covid-19 pandemic, suggested... END_OF_DOCUMENT_TOKEN_TO_BE_REPLACED