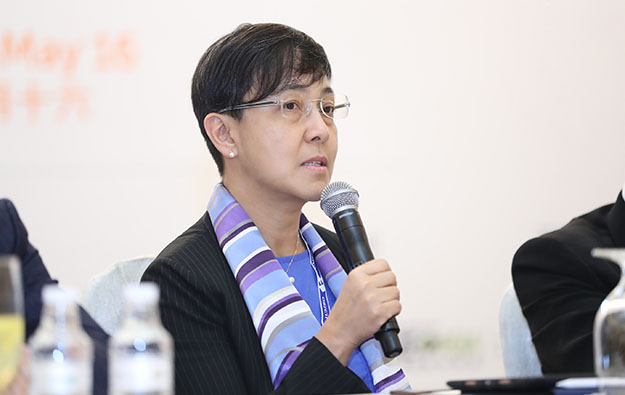 The head of the Macao Government Tourism Office (MGTO), Maria Helena de Senna Fernandes, forecasts the number of tourists visiting Macau this year will probably rise between 5 percent and 6 percent compared to 2018.

Ms Senna Fernandes (pictured in a file photo) was speaking to reporters on the sidelines of a press conference on Wednesday. The official said the Macau authorities were forecasting the aggregate 2019 visitor tally could reach up to 38 million.

In 2018, the aggregate number of visitor arrivals exceeded 35.80 million, an increase of 9.8 percent from 2017, according to official data. On Wednesday, the city’s Statistics and Census Service said that for full-year 2018 the overnight-stay visitor tally rose by 7.2 percent to slightly above 18.49 million, accounting for nearly 51.7 percent of total visitor arrivals and setting a new record in terms of quantity.

Ms Senna Fernandes said that MGTO expected the number of visitor arrivals during the Chinese New Year holiday to rise by between 8 percent to 9 percent, boosted by the opening of the Hong Kong-Zhuhai-Macau Bridge. Chinese New Year falls on February 5 this year.

The MGTO director said additionally that her department wanted to attract more tourists from international markets, namely from European countries.

The tourism office said in a statement issued following Wednesday’s media briefing that in 2019 it would strive to foster what it termed “smart tourism” and implement strategies and recommendations in the Macao Tourism Industry Development Master Plan, which was published in September 2017.

The statement added that MGTO would actively work to develop Macau into a tourism-education and training base serving the Guangdong-Hong Kong-Macau Greater Bay Area. The latter is a Chinese central government initiative to integrate the economies and people of Guangdong province on the mainland, and the two neighbouring Special Administrative Regions.

MGTO would also work, said the statement, to improve the overall quality of the city’s tourism industry.

The tourism bureau also vowed to foster the development of the local catering sector, as well as to host and support what it termed “international gastronomic events,” in order to strengthen Macau’s appeal as a “Creative City of Gastronomy”. The latter refers to Macau’s role in promoting intangible heritage relating to its food traditions, as part of a wider UNESCO initiative.

Slot-machine maker and game-content provider Aristocrat Leisure Ltd says it has completed the acquisition of Roxor Gaming Ltd, a game developing company based in London, in the United Kingdom. The... END_OF_DOCUMENT_TOKEN_TO_BE_REPLACED