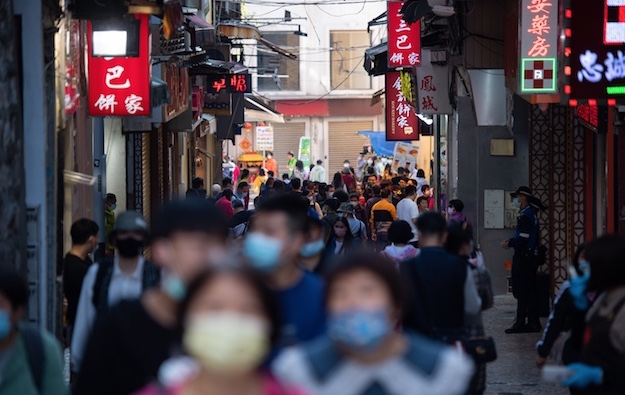 Visitor arrivals to Macau on the sixth day of the Chinese New Year (CNY) holiday period fell by 5.4 percent sequentially, amounting to 14,399. The city had welcomed a total of 15,214 visitors on the previous day.

The number of arrivals on the sixth day of the holiday break was down by 33.5 percent from the prior-year period. The latest data put the number of visitor arrivals to the city at 77,383 between February 11 and February 16 (Tuesday), down 68.2 percent from a year earlier.

The preliminary figures from the city’s Public Security Police were compiled by the Macao Government Tourism Office. The data compares with the previous Chinese New Year period, which ran from January 24 to January 30, 2020, just before the onset that February of the Covid-19 pandemic that saw a slump in Macau’s tourist traffic.

China’s State Council designated February 11 to 17 inclusive, as the Chinese New Year holiday period for 2021. In the first six days of the holiday break, Macau recorded an average of about 12,897 visitor entries per day, according to official data.

The number of mainland visitor arrivals on February 16 was 13,110, an increase of 5.3 percent from the comparable period a year earlier. That pushed the aggregate tally of mainland Chinese tourists in the first six days of the holiday period to 70,336, down 49.6 percent from the prior-year period.

The week-long break – linked annually to the lunar calendar and also known as the spring “Golden Week” – is typically a busy period for Macau’s casino resorts and the city’s tourism trade.

Her comments were made on a live discussion programme hosted every weekday by the Chinese-language radio service of Macau public broadcaster TDM.

In a Tuesday note, brokerage Sanford C. Bernstein Ltd said that it expected visitor arrivals to Macau “to increase only slowly over the next months.” The “key jump” in visitor arrivals “will come when visa processing switches back to digital and same-day, which may take some time,” added the institution.

The year 2024 is still the targeted start date for operation of a five-star hotel and casino complex at the Westside City Project (pictured in an artist’s rendering) in Manila, the Philippine... END_OF_DOCUMENT_TOKEN_TO_BE_REPLACED