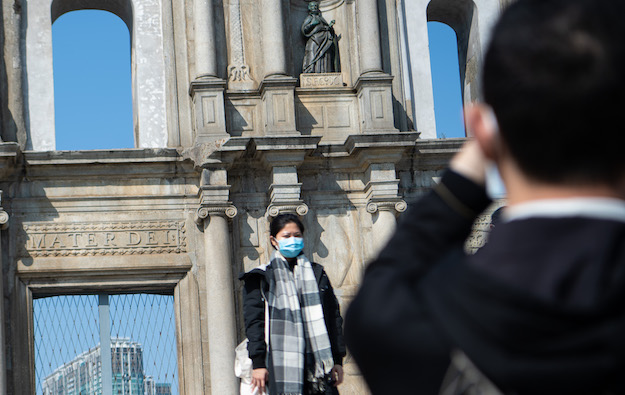 The tally of visitor arrivals to Macau in March 2020 “tumbled” by 93.7 percent year-on-year to 212,311, said on Tuesday the city’s Statistics and Census Service.

The decline was influenced by “the ongoing epidemic of the novel coronavirus pneumonia,” said the government body, referring to the Covid-19 pandemic that in recent weeks saw Macau ban all travellers from overseas and impose a 14-day quarantine on most visitors from the Greater China region.

The aggregate number of visitor arrivals to Macau in March represented nonetheless an increase of 35.8 percent from February, noted the statistics bureau.

In terms of source markets, the number of mainland Chinese visitors “plummeted” by 96.3 percent year-on-year in March to 88,890, with the number of those travelling under the Individual Visit Scheme (IVS) “plunging” by 99.4 percent.

Visitors from Hong Kong (111,347) fell by 81.5 percent from the prior-year period, while those from other major source markets showed decreases of more than 90 percent, said the statistics bureau.

Macau’s Chief Executive, Ho Iat Seng, said on Monday that the city’s government would ask China’s central government to increase the number of cities covered by the IVS, once the Covid-19 pandemic is controlled.

Macau recorded 965 “gaming-related” crimes in full-year 2022, down 29.7 percent on the 1,372 identified in the previous year, according to the latest statistics published on Tuesday by... END_OF_DOCUMENT_TOKEN_TO_BE_REPLACED