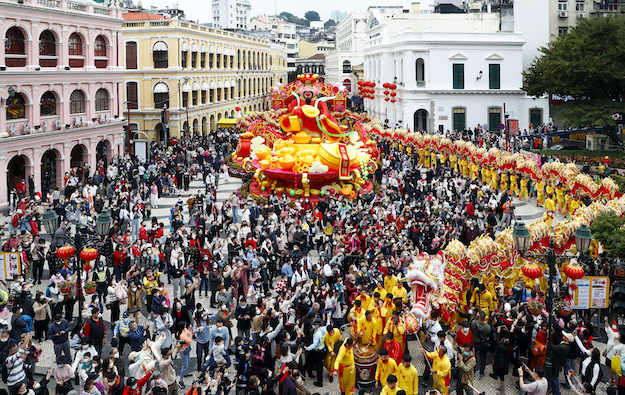 Macau welcomed more than 318,000 visitors in the first five days of the Chinese New Year (CNY) holiday period, according to official data. The average number of visitor arrivals in the period stood at about 63,600 a day, up 291.9 percent from the comparable period a year earlier, showed the preliminary figures from the city’s Public Security Police.

Mainland visitors accounted for 57.3 percent of all arrivals in the first five days of the holiday, at 182,250, while Hong Kong consumers represented 37.1 percent of total visitors, at 117,842, showed the data.

On Tuesday (January 24) Macau recorded 90,391 arrivals, its highest daily total since early 2020, the time of the onset of the Covid-19 pandemic, according to the figures released by the authorities.

China’s State Council has designated the holiday period for mainland residents as January 21, a Saturday, to January 27, a Friday, inclusive. The festive break in Hong Kong – another important source market for Macau’s tourists – was designated as running from January 23 to January 25.

Before the festive period started, the Macau authorities had said they anticipated the city receiving about 47,000 people daily during the Chinese New Year break, with the daily tally possibly peaking at 60,000.

When speaking to reporters before the week-long holiday, Macao Government Tourism Office director, Maria Helena de Senna Fernandes, had said many of Macau’s hotels were “fully booked” in terms of available capacity, for most days of the Chinese New Year period.

According to a survey by GGRAsia, available room capacity at many Cotai casino-resort hotels had already been sold out by early January, for most days of the festive period.

The average daily volume of visitors to Macau during the previous lunar new year period, in early February 2022, was 16,242. The tally for the full seven days of the Chinese New Year break in 2022 stood at 113,699, according to Macau government data.

In pre-pandemic times, the Chinese New Year festival has been a period of high demand for Macau’s casino and tourism industries. In 2019 – the most recent pre-pandemic trading period – Macau had seen over 1.2 million visitor arrivals for that seven-day holiday period, according to official data.

A number of gaming industry analysts however caution that visitor volume by itself, is neither a proxy for, nor an especially accurate predictor of, Macau’s casino gross gaming revenue performance.

The ramping up of transport capacity between Hong Kong and Macau, as well as between mainland China and Macau – after three years of Covid-19 related restrictions – has been mentioned by commentators as an important step for recovery of Macau’s tourism and casino sectors.

Some Macau casinos visited by GGRAsia on Thursday, actually had tables that were closed, notwithstanding strong consumer demand during Chinese New Year (CNY). The reasons for some tables being... END_OF_DOCUMENT_TOKEN_TO_BE_REPLACED