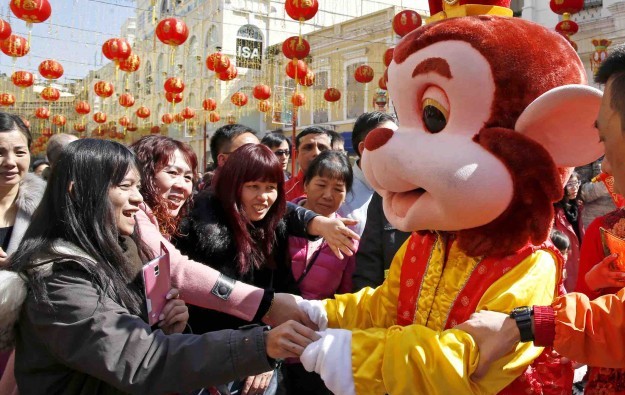 Visitor arrivals to Macau during the first five days of the 2016 Chinese New Year holiday period were up by 4.8 percent from a year earlier.

The city recorded around 528,000 arrivals by mainland Chinese visitors, an increase of 5.4 percent year-on-year compared to the equivalent period in 2015. Arrivals from mainland China made up 72 percent of total arrivals between Sunday and Thursday.

Wednesday was the busiest day of the Chinese New Year holiday period so far. A total of 183,000 visitor arrivals were recorded in Macau, with mainland Chinese visitors accounting for 77 percent of the total.

The Chinese New Year holiday period is usually a peak season for the city’s casino industry as hundreds of thousands of mainland Chinese tourists take advantage of the extended break to visit Macau.

In a conference call with investment analysts held on Thursday, the chairman of casino operator Wynn Macau Ltd said it was still “a little too soon” to evaluate how business for the Chinese New Year period was performing.

Steve Wynn added: “The mass component clearly looks a little stronger than in the past. It’s too soon to tell, because the weekend is coming up with the VIP [players].”

In a note issued on Friday, Union Gaming Securities Asia Ltd analyst Grant Govertsen said he had heard similar commentary from other Macau gaming operators regarding early “solid mass trends” during the Chinese New Year period both in casinos on the Macau peninsula and in Cotai.

During the 2015 holiday period for Chinese New Year, Macau registered almost 1.03 million visitor arrivals (including inward travel by imported workers and other people living in Macau under different visa arrangements), a decrease of 2.4 percent over the corresponding period in 2014.

The imminent return of package tours from mainland China will not only help boost Macau’s tourism businesses, but is also expected to help casinos gain more foot traffic in their mass gaming... END_OF_DOCUMENT_TOKEN_TO_BE_REPLACED