Macau welcomes 92k visitors in first 3 days of May break 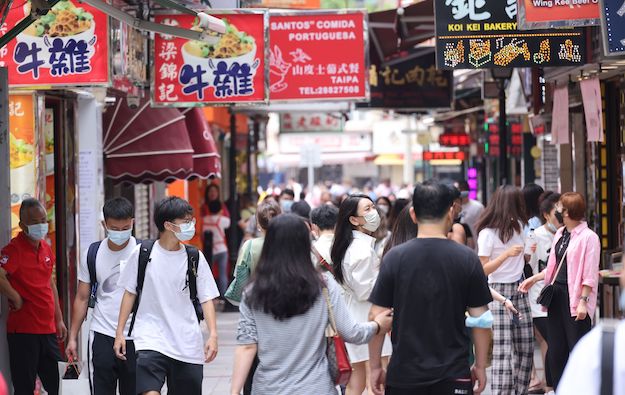 Macau had close to 92,400 visitor arrivals for the first three days of the five-day holiday surrounding May 1′s Labour Day. But after surpassing the 40,000-arrival mark in the first day of the holiday period – April 30 – the daily tally declined in the following two days, to fewer than 26,000 arrivals per day, according to figures from Macau’s Public Security Police.

China’s State Council has designated the holiday period as April 30, a Saturday, to May 4, a Wednesday, inclusive. Mainland China currently has a quarantine-free travel bubble with Macau, and is presently the main source of Macau’s tourists.

Macau’s tourist arrival tally on April 30 stood at 41,544. That was the best daily performance since the start of 2022, according to a press release from the Macao Government Tourism Office.

But the daily aggregate subsequently dwindled to approximately 25,900 on May 1, and 25,000 on May 2, according to police statistics.

Since April 25, people intending to travel to Macau from neighbouring Guangdong province, in mainland China, must hold a nucleic acid test certificate issued within 72 hours proving they are ‘negative’ for Covid-19 infection. Macau authorities had previously announced that starting from April 20 people travelling to Macau from Guangdong – via any land or marine checkpoints – had to hold a Covid-19 test certificate issued within 48 hours, instead of the previously-maintained 24 hours.

For 2021, China’s State Council had designated the first five days of May as the Labour Day break: Macau recorded around 114,000 visitor arrivals for the first three days of that period.

In 2019, prior to the start of the Covid-19 pandemic, Macau had more than 531,000 visitor arrivals for the first three days of that year’s Labour Day holiday period. A majority of those arrivals came from mainland China, according to information released by the Macao Government Tourism Office at the time.

Macau casino services firm Macau Legend Development Ltd says that a review conducted by an independent consultant “did not note any irregularity” in the dealings between the company and... END_OF_DOCUMENT_TOKEN_TO_BE_REPLACED