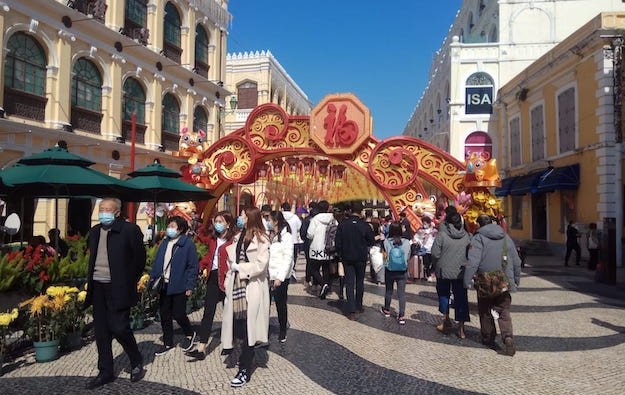 Macau welcomed nearly 95,700 visitors in the first six days of the Chinese New Year (CNY) holiday, according to official data. The average number of visitor arrivals in the period stood at about 15,949 a day, up 23.2 percent from the comparable period in 2021, showed the data.

Before the festive period started, the Macau authorities had said they anticipated receiving 20,000 people daily during the Chinese New Year break.

The number of mainland visitor arrivals in the first six days of the holiday break this year was 89,245, up 26.5 percent from the comparable period a year earlier. Mainland China is currently the only place to have a largely quarantine-free travel arrangement with Macau.

China’s State Council has designated the holiday period this time as January 31, a Monday – the eve of Chinese New Year – to February 6, a Sunday.

Visitor arrivals to Macau during the entire Chinese New Year period in 2021 totalled 90,615, according to official data. The average number of visitor arrivals to the city during last year’s week-long break stood at 12,945 a day.

The Chinese New Year period is traditionally a peak time for the city’s tourism trade. In 2019 – the most recent pre-pandemic trading period – Macau had seen over 1.2 million visitor arrivals for that seven-day holiday period, according to tourism bureau data.

Macau recorded 965 “gaming-related” crimes in full-year 2022, down 29.7 percent on the 1,372 identified in the previous year, according to the latest statistics published on Tuesday by... END_OF_DOCUMENT_TOKEN_TO_BE_REPLACED