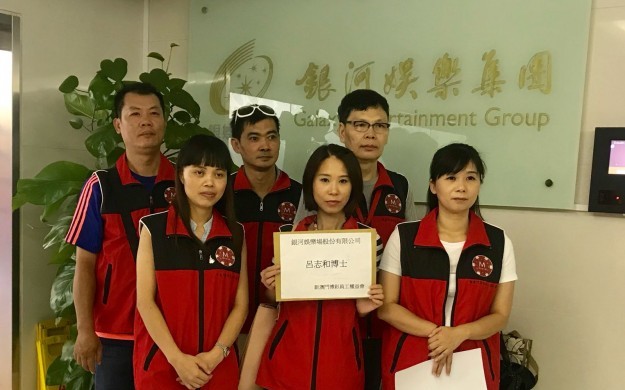 A Macau gaming labour activist group says it is organising a petition among staff at Macau casino operator Galaxy Entertainment Group Ltd urging the firm to issue a “summer bonus” to employees.

So said Cloee Chao of labour group Professional for Gaming of New Macau, in comments to GGRAsia. She added that it was pushing for such payment to be equivalent to a “14th-month” salary to the employees.

On Friday casino operator Wynn Macau Ltd had stated it was offering most of its staff a “special bonus” equal to one month of gross salary for non-executive staff, with the gratuity payable on August 15. Wynn Macau did not say whether the payment was a one-off, or part of a multi-year scheme, such as it had in place between 2014 and 2017 inclusive.

The first delivering of a letter urging Galaxy Entertainment to pay a summer bonus took place on Tuesday (pictured) at the casino company’s human resources department in the ZAPE district of downtown Macau. Another round of signature collecting for the petition is planned for Wednesday outside the casino company’s Galaxy Macau casino resort on Cotai; and on Friday at the firm’s StarWorld Hotel in downtown Macau.

The petition was in response to “concerns” expressed to the labour group  by gaming operations workers, “especially dealers,” that their employer would not be minded to pay any additional bonus this year, Ms Chao told us.

Galaxy Entertainment paid in February what it termed a discretionary bonus to its eligible employees at senior manager grade and below; in that case an amount equivalent to one month of salary. The firm had also announced in the same month a salary increase for its eligible employees, with effect from April 1, 2018.

GGRAsia approached Galaxy Entertainment for comment on whether it would offer any additional bonus for this year, but had not received a reply by the time the story went online.

Macau operator MGM China Holdings Ltd announced in February the issuing of a discretionary bonus, to have been paid in two instalments; plus a “special bonus”; the latter equivalent to a 14th-month salary for eligible non-management team members.

Gaming revenue at Paradise Co Ltd, an operator in South Korea of foreigner-only casinos, rose by 312.9 percent year-on-year, to KRW39.17 billion (US$27.6 million). But such revenue was down 22.4... END_OF_DOCUMENT_TOKEN_TO_BE_REPLACED