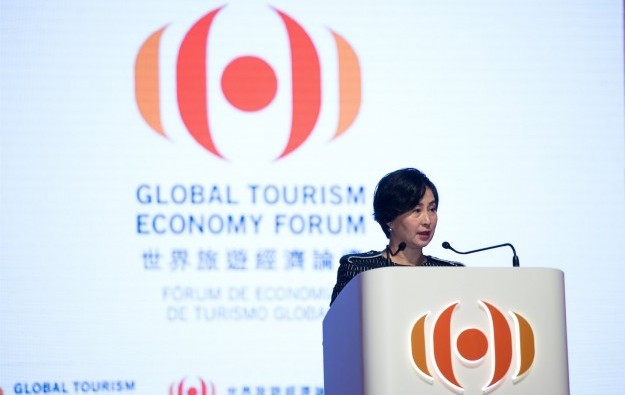 “We can see that the general market is gradually stabilising,” Ms Ho (pictured) told members of the media.

She added: “Not only gaming revenue; [but also] the number of visitor arrivals and consumption demand are stabilising,” Ms Ho said. “This is very positive,” she stated, as quoted by public broadcaster TDM.

She was talking at the Global Tourism Economy Forum, which took place in Macau during the weekend. Ms Ho is vice chairperson and secretary-general of the Forum. The initiative aims to discuss the international impact of tourism on economic development.

Following the two consecutive months of GGR expansion judged year-on-year, there has been some optimism among operators and investors that the market might at least be stabilising. Two senior executives of casino operator SJM Holdings Ltd said earlier this month that Macau’s gaming sector was starting to show some sustained performance in October.

In her comments to media over the weekend, Ms Ho did not provide any estimate for the performance of Macau’s casino sector. She said several government initiatives introduced in recent years – including infrastructure development and promotion campaigns – would be beneficial for Macau’s overall tourism industry.

MGM China owns and operates the MGM Macau casino-hotel on the Macau peninsula. The firm is building MGM Cotai, a new casino resort in Macau’s Cotai district. The property is currently scheduled to open in the second quarter of 2017.

The imminent return of package tours from mainland China will not only help boost Macau’s tourism businesses, but is also expected to help casinos gain more foot traffic in their mass gaming... END_OF_DOCUMENT_TOKEN_TO_BE_REPLACED