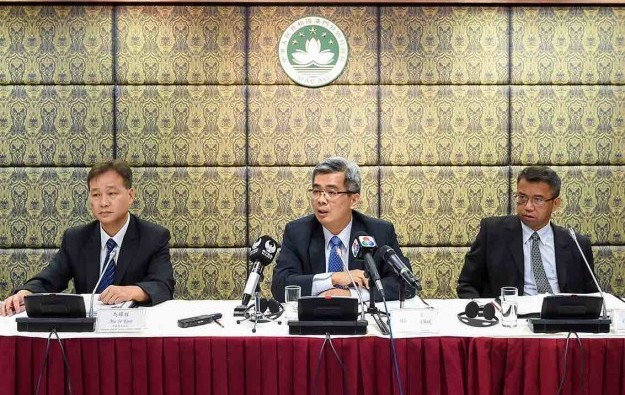 Macau recorded a total of 1,118 gaming-related crimes in the first nine months of 2015, up by 33.6 percent from the prior-year period, said the city’s Secretary for Security, Wong Sio Chak (pictured centre), speaking on Wednesday. The list includes cases of abduction and crimes such as extortion and usury.

In the period between January and September, a total of 308 cases of unlawful detention were recorded, reflecting a 135 percent increase year-on-year. Such cases are typically associated in Macau with loan sharking connected to gambling, the authorities have said.

Usury cases – unlawful lending of money – in the period increased by 35.6 percent year-on-year to 240, show data released on Wednesday.

The number of reported cases of illegal gambling more than doubled from the prior-year period, to 44 cases from 21 in the first nine months of 2014, according to the data.

Speaking at a press conference, Mr Wong said most of the cases of illegal confinement and usury in the first nine months of 2015 took place inside Macau’s gaming venues. Most of the suspects and victims were not Macau residents, the official added.

Mr Wong said there was “no indication” that the slowdown in the gaming industry has had any negative impact on Macau’s safety, as most of the offences did not have a direct impact on the local community.

Macau’s casino gross gaming revenue was down 35.3 percent in the first 11 months of 2015 compared to the prior-year period, according to official data published on Tuesday.

On Wednesday, Mr Wong said the increase in the number of reported gaming-related crime cases had to do with “a better enforcement of the law”. He added that gaming-related cases involving a total of 1,281 suspects had been sent to the Public Prosecutions Office, up by 52 percent year-on-year.

The secretary additionally stated that the police would keep monitoring gaming venues to prevent and combat any illegal activities in the city’s casinos. Mr Wong had mentioned in previous statements there had been increased use of official surveillance in the city’s casino properties, but stressed it would not jeopardise the development of Macau’s gaming sector.

The first nine months of this year witnessed a slight decrease in the number of all crime cases in Macau, down by 2.2 percent year-on-year to 10,347.

Most of Macau’s casino operators are likely to generate positive free cash flow in the first quarter, given the robust recovery level of mass-market gross gaming revenue (GGR) in January, relative... END_OF_DOCUMENT_TOKEN_TO_BE_REPLACED