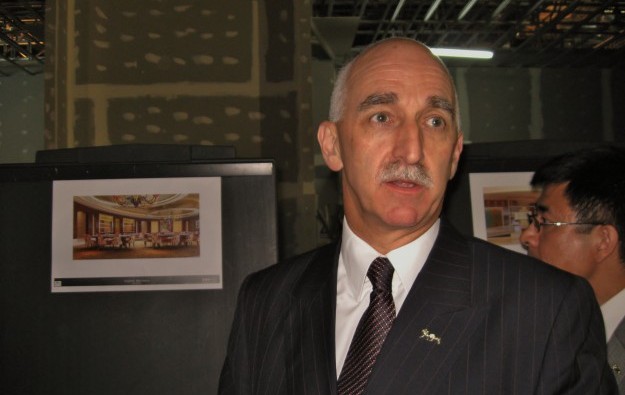 It was unlikely that Macau would return to the highest levels of growth seen in the gambling business several years ago, said Grant Bowie (pictured), chief executive of casino operator MGM China Holdings Ltd, in comments on Thursday.

In 2011, Macau casino gross gaming revenue (GGR) expanded by 42 percent year-on-year, according to data from the city’s Gaming Inspection and Coordination Bureau. For the following two years GGR expanded by teens of percent, before contracting by nearly 3 percent year-on-year in 2014 and declining by a whopping 34 percent in 2015.

Now, following two consecutive months of GGR expansion judged year-on-year, there has been some optimism among operators and investors that the market might at least be stabilising.

“I think all of us are looking for consistency and stabilisation,” Mr Bowie told GGRAsia on the sidelines of the launch of this year’s MGM Macau Oktoberfest at the company’s Macau peninsula property.

But he added: “I don’t think any of us expect to see anything like the growth we have seen in the past. And I think it again reinforces [the fact that] the market is maturing as we go through this [economic] diversification and we add more product to the market.”

The Macau government has called on the city’s six gaming operators to add more non-gaming attractions as the city seeks in particular to moderate its dependence on high-stakes VIP gambling. Such gaming activity still accounts for approximately 50 percent of casino GGR.

An effective tax rate of 39 percent on all forms of casino gambling helps to swell government coffers in a market that still managed to generate GGR of MOP230.84 billion (US$28.9 billion) last year despite the downturn.

Mr Bowie noted that the industry was happy to assist the government in its diversification aims, and that there was room for improving coordination on that topic.

“It is about strengthening the [customer] base and broadening the appeal of the destination,” he said.

“And I think that’s an issue that collectively both the gaming operators and the government all need to spend more time collaborating [on]; getting a single message and a single focus on both marketing the destination and then selling [the services of] our individual properties,” he added.

While declining to comment on the specifics of MGM China’s performance in the third quarter or prospects for the fourth quarter, Mr Bowie did give some thoughts on the industry chatter regarding possible market stabilisation in casino GGR.

“I think we have seen some positive signs and a certain stabilisation in the market,” he told GGRAsia.

“I think a lot of us [in the industry] are looking for inflections. I’d like to think that they are true [happening], but the truth is going to take time to emerge. The most important thing is that there does seem to be a lot more confidence and positive attitude [in the market] and that’s always a good starting point.”

Asked about progress on MGM China’s new Cotai property, MGM Cotai – where the timetable for completion has been put back several times – Mr Bowie stated: “We’re continuing to work through it… the main factor is government approvals. The timeline is as we have stated, and we continue to work toward that date in the second quarter [of 2017].”

Later, in other comments to Macau-based media, Mr Bowie gave some colour on the possibility that MGM Cotai might focus on mass-market business, while MGM Macau might remain a base for the VIP segment.

“We acknowledge that the VIP business is important to us and we have a very strong relationship [with the VIP segment] via our [existing] Macau property,” stated the MGM China CEO.

“That’s where we would see our strength being with our VIP operators [junket promoters]. And we want to take care of them in our existing property and build and diversify [our business],” he added.

“Diversification implies we [as an industry] need to focus more on the mass market, because it’s where people will likely come, looking for things other than gaming. So that means entertainment, the food and beverage, the retail; so if we’re serious [as an industry] – and we are at MGM [China] – then that’s our area of concentration.”

“From a practical viewpoint, it seems quite difficult” for Japan’s national authorities to be able to make a decision by the end of the calendar year, on respective proposals by Osaka... END_OF_DOCUMENT_TOKEN_TO_BE_REPLACED