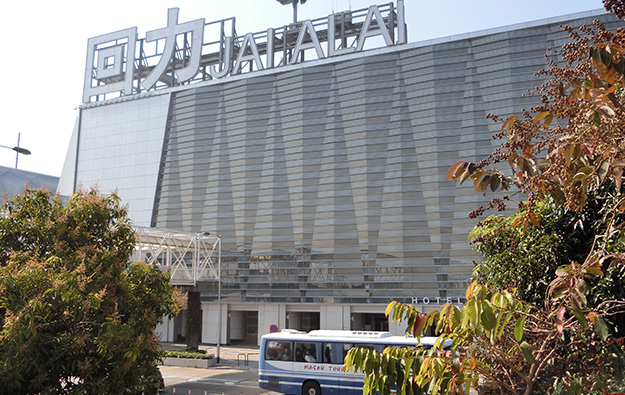 The hotel at Macau’s remodelled Jai Alai casino complex, a property situated near the city’s Outer Harbour Ferry Terminal in the downtown district, opened on Wednesday for guest stays, in time for the city’s annual motor sport meeting, the Macau Grand Prix, held from Thursday to Sunday.

Marco Ieong, vice president of Jai Alai and the casino-only venue Oceanus next door, confirmed to GGRAsia the Wednesday launch of the 132-room hotel. He also noted that two food and drink outlets on the ground floor of Jai Alai had also opened for business.

A year ago Angela Leong On Kei, an executive director at Macau casino operator SJM Holdings Ltd, the firm supplying Jai Alai’s casino licence, told GGRAsia in an interview that the property would feature the return of a local favourite – a buffet restaurant that had been at SJM Holdings’ flagship peninsular property Grand Lisboa, but was closed in 2014.

Mr Ieong told us Jai Alai’s new buffet facility was yet to open as it needs the approval of the Macao Government Tourism Office.

According to an SJM Holdings filing in November 2012, the Jai Alai premises were as of that date being leased to the casino group by an entity controlled by Ms Leong. Since then the Jai Alai site, which had housed one of Macau’s oldest casinos and had no hotel, has been completely remodelled.

The casino and the podium of the building opened in December last year. Some shops, branded as “JA Avenue”, opened in April this year.

Casino Lisboa, inside Hotel Lisboa on the city’s peninsula, “Casino Oceanus at Jai Alai” – including the gaming area in the Jai Alai complex – and Casino Taipa inside Regency Art Hotel in the Taipa district of the city, are what SJM Holdings refers to as “self-promoted” casinos.

The extensive revamp of Jai Alai was announced in 2012. But the work was suspended from February 2014 to May 2015, as SJM Holdings said it had been awaiting Macau government approvals.

As of June 30, 2016, SJM Holdings had entered into capital commitments on the Jai Alai renovation amounting to approximately HKD557 million (US$71.3 million), SJM Holdings said in its 2016 interim report.