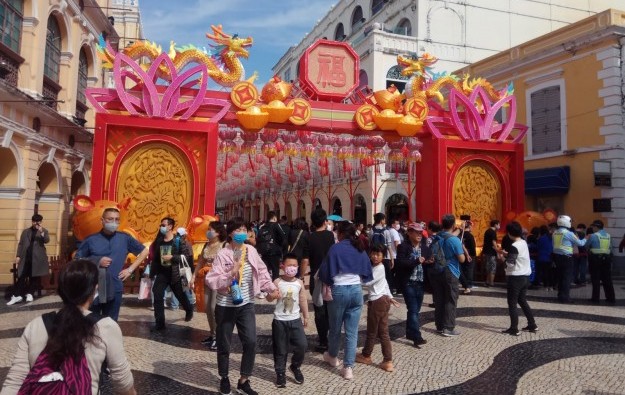 Macau’s visitor arrivals for the month of January fell by 16.8 percent year-on-year to just above 2.85 million, according to data released on Friday by the city’s Statistics and Census Service. That month included the week-long Chinese New Year holiday period.

The statistics service attributed the decline in the number of visitor arrivals in January to the “impact of the Covid-19 epidemic”. A separate set of data from the Macau Hotel Association – disclosed on Wednesday by the Macao Government Tourism Office (MGTO) – showed that the average occupancy rate of the city’s three- to five-star hotels had also fallen in that month, as it witnessed at month-end the beginning of the local alert on the coronavirus outbreak.

In January, the number of same-day visitors was down by 14.2 percent year-on-year to 1.53 million; while that of the overnight visitors decreased by 19.6 percent to nearly 1.32 million, according to the statistics service.

Visitors from the city’s major feeder markets – namely mainland China, Hong Kong, Taiwan and South Korea – have all seen a double-digit decline in January, according to the official data.

Authorities in mainland China have stopped issuing from late January – and until further notice – IVS visas for visits to Macau by mainland residents. Tour groups from the mainland to Macau are also suspended. The authorities have said the measures are part of the efforts to cut travel across China and so reduce the risk of further spread of the coronavirus.

The average length of stay of visitors remained steady at 1.2 days in January, according to Friday’s data. During that month, the duration of stay of overnight visitors increased slightly by 0.1 day to 2.3 days.

Macau saw a peak in visitor arrivals in 2019, when the city received 39.4 million visitors, the highest since 2008, according to available official data.

A downtrend in the city’s annual visitor tally was last seen in 2015, the year when the city received just over 30 million visitors. That year also coincided with the city’s down time in the gaming industry as its overall casino gross gaming revenue had started to decline in June 2014 – it eventually lasted for two years.

A casino cruise brand reportedly controlled by Malaysian entrepreneur Lim Kok Thay is to launch services from Singapore fewer than five months after the Lim family-founded Dream Cruises brand of the... END_OF_DOCUMENT_TOKEN_TO_BE_REPLACED