Macau’s leader watching for good news in July on travel 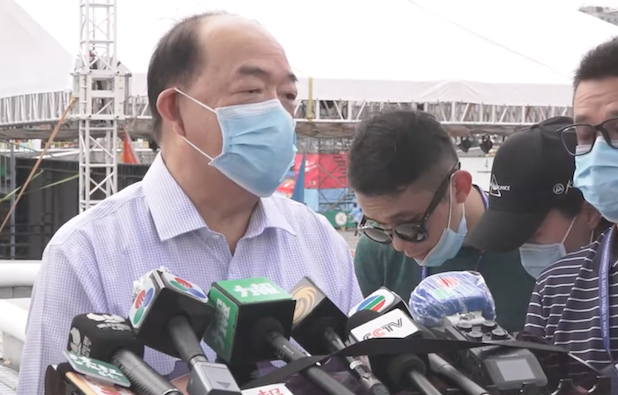 Macau’s Chief Executive, Ho Iat Seng (pictured), said on the sidelines of a public event on Thursday that he was watching to see whether there would be any “good news” in July regarding easing of regional intercity travel restrictions brought about by Covid-19.

He added there had been hopes of action during June, but a fresh cluster of infections in China’s capital Beijing had caused some changes of approach.

Mr Ho’s comments were made prior to the announcement by the local authorities of a new Covid-19 case in Macau, the first in almost 80 days.

The Chief Executive also said in his Thursday comments that if local casino operators could “persist” in avoiding staff layoffs, “I think it will be very soon that we can anticipate some good news”.

Investment analysts have said Macau’s six casino licensees have been maintaining overheads often amounting to millions of U.S. dollars per day in a trading environment where casino gross gaming revenue has contracted in the 90s of percent year-on-year since April.

Mr Ho was responding on Thursday to questions from local reporters, including whether Macau could have some form of arrangement for quarantine-free travel with the neighbouring Chinese mainland province of Guangdong, and with Macau’s neighbouring Special Administrative Region, Hong Kong.

Macau’s leader noted Hong Kong had already told the Macau authorities it would like to adopt a “pilot” programme on some form of mutual quarantine-free travel between the places.

He affirmed earlier commentary via Hong Kong that such travel would probably be limited in scope at first – in likelihood for business travellers, civil servants and those that had special urgent needs, such as family emergencies.

The two cities would need to organise mutual recognition of their systems for testing to ensure individuals were negative for Covid-19 infection, said Mr Ho. Under such a programme there would be some form of quota limit regarding the number of individuals that could take part in a quarantine-free travel programme. Testing on such a scheme was under way said Macau’s leader, without mentioning further details.

A similar scheme has been implemented for a limited number of people to travel quarantine-free between Macau and its neighbouring mainland city of Zhuhai in Guangdong province.

Earlier in the week, a number of Hong Kong media outlets had reported – variously citing sources none of them identified – that Macau might not be an initial beneficiary from Hong Kong’s first steps at easing travel. Shenzhen, a mainland special economic zone next door to Hong Kong, was flagged by Hong Kong media as the likely first point of quarantine-free travel, possibly as early as Monday (June 29).

Small steps in quarantine-free travel for select people would still be a long way from a resumption of significant tourism flows that investment analysts say would probably be necessary to see a meaningful improvement in Macau casino gross gaming revenue.

One sign investors are watching for, is news of resumption of China’s Individual Visit Scheme (IVS) for outbound visas allowing mainland residents from selected cities to travel to Macau and some other places. The scheme had been paused in January amid the emergence of the novel coronavirus linked to Covid-19 infection.

“While we remain hopeful, we are sceptical that IVSs will resume in July,” said a Monday note from brokerage Sanford C. Bernstein Ltd.

The stock prices of Hong Kong-listed firms directly linked to Macau casino operations rose in Monday trading, following the Saturday announcement that the six incumbent licensees had each been... END_OF_DOCUMENT_TOKEN_TO_BE_REPLACED