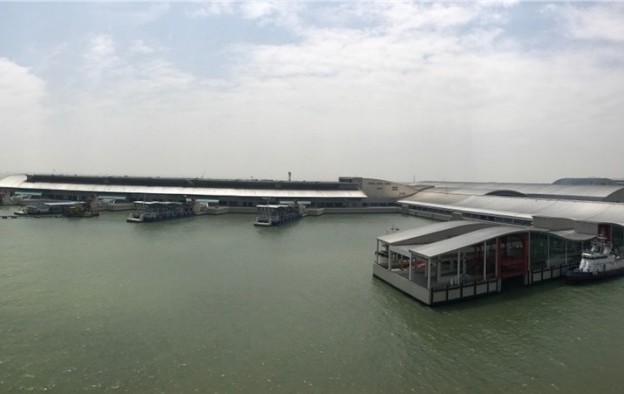 Macau’s new Pac On ferry terminal – now officially named the Taipa Maritime Terminal – opens to passengers on June 1, according to Susana Wong Soi Man, the head of the city’s Marine and Water Bureau.

Some passenger facilities, namely restaurants, souvenir shops and travel agency outlets, will not be ready for another one or two months, said Ms Wong in comments at Thursday’s inauguration ceremony.

“The temporary terminal has an average number of passengers that represents about 35 percent of the total. With the new infrastructure, we hope that to increase to more than 40 percent [of the total],” she said.

The bureau said in a statement earlier this month – following an emailed enquiry from GGRAsia – that upon opening, the number of ferry operators, sailings and routes available at the new facility would be the same as that provided by the old and temporary Taipa ferry terminal.

“We believe that the new Taipa Ferry Terminal should reduce the capacity constraints and alleviate the traffic congestion at the existing temporary terminal in Cotai and spur a paradigm shift in tourist arrivals by sea travel in the coming quarters,” said a note on Thursday from Daiwa Securities Group Inc.

“We believe that the opening of the Taipa Ferry Terminal will begin the progressive and organic shift of GGR [gross gaming revenue] contribution to Cotai as incremental capacities of the new terminal (i.e., helipads and additional berths) is brought online post-opening,” stated analysts Jamie Soo, Adrian Chan and Jennifer Wu.

The Pac On ferry terminal project has been marred by reported delays and controversy, mainly as the result of changes in the design of the terminal, including its enlargement. The terminal was originally scheduled to be up and running by 2009.

The final budget stood at MOP3.8 billion (US$474 million). In 2005, when construction of the scheme started, the estimated budget was MOP583 million. But Raimundo do Rosário, the Secretary for Transport and Public Works, noted at Thursday’s event that the scope of the project had doubled in size since it was first conceived.

The temporary Taipa ferry terminal, which first came into use in 2007, will be demolished following the operation of the new Pac On ferry terminal. This provisional infrastructure will be replaced by supporting facilities for the new ferry terminal, according to the government.