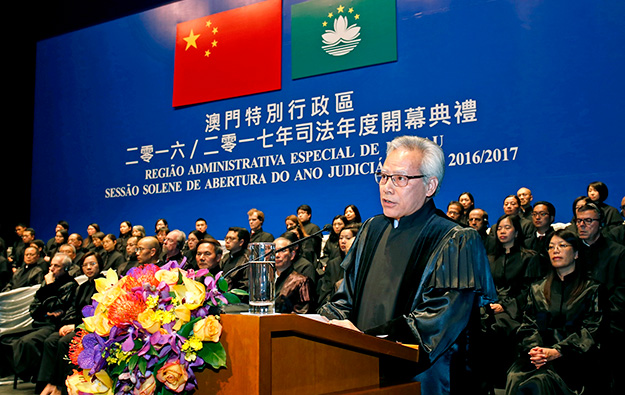 Macau’s most senior judge has warned that the image of the city’s gaming industry could be negatively affected if disputes or crimes linked to gambling debts continued to increase and to spread outside the city’s casino properties.

“There have been several cases where those illegally detained were found dead: this deserves special attention,” said Sam Hou Fai (pictured), President of Macau’s Court of Final Appeal, in a speech at an event on Wednesday.

“It also shows that gaming debt-related disputes or crimes have appeared to extend beyond casinos. If these crimes are not curbed in a timely manner, it would impose some negative impacts onto the gaming sector, the pillar industry of Macau,” the judge added.

Mr Sam was speaking at a ceremony marking the start in Macau of the 2016-17 Judicial Year.

Macau recorded a total of 814 cases of suspected gaming-related crime in the first half of 2016, according to police data. The figure represented a jump of 13.5 percent in year-on-year terms.

In August, a press release from the Office of the Secretary for Security, in Macau, mentioned that three suspected cases of unlawful detention relating to gaming activities – said to have taken place on various dates in July and August and that ended in each instance in those illegally detained being found dead – had “been solved”.

The Office had added that – despite the long-running slowdown seen in the city’s gaming industry – it saw “no indication” this had led to an increase in criminal activity by Chinese criminal gangs known as triads. Triads have been linked in media reports on Macau with illegal activities including loan sharking for gambling and unlawful detention of debtors.

In April the Macao government said the appointment of Macau’s Secretary for Security, Wong Sio Chak, to the city’s Gaming Commission was a “positive” regarding the regulating of the gaming industry and the maintenance of public security.

The commission’s purpose is to research gaming, draft gaming policy, and to monitor and create guidelines for the industry, according to the executive order that established the body.

International casino operator Las Vegas Sands Corp has been ranked as the most sustainable firm in the global casino sector, according to the 2023 edition of the S&P Global Sustainability... END_OF_DOCUMENT_TOKEN_TO_BE_REPLACED