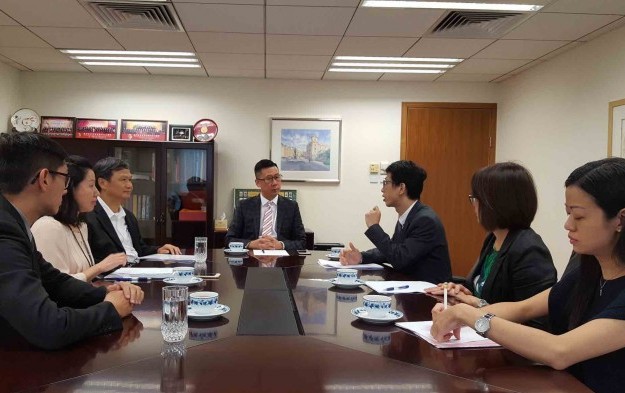 Hon Wai, deputy director of Macau’s Social Welfare Bureau (SWB), says the bureau is of the view that a government suggestion to bar Macau casino workers from entering casinos during non-work hours can help lower the risk of these workers developing a gambling addiction.

Macau’s gaming regulator, the Gaming Inspection and Coordination Bureau – also known by the Portuguese acronym DICJ – has suggested amending existing legislation so that casino workers be barred from taking part in any gaming-related activity inside casinos during non-work hours.

Representatives from the Social Welfare Bureau have recently met with officials from the city’s gaming regulator to discuss the proposed suggestion, according to a press release from DICJ on Monday. The date of the meeting (pictured) was not disclosed in the release.

Officials attending the meeting agreed that the government had to collect more opinions from within the industry before setting “the aim and direction” of the legal amendment, the press release stated.

Paulo Martins Chan, director of the Gaming Inspection and Coordination Bureau, had said in September that the government had already garnered initial support in the local community for tits proposed suggestion.

The government had mentioned in June the possibility of introducing changes to the law that regulates who can enter, work and gamble in the city’s casinos. The gaming regulator had said at the time that representatives from 11 Macau casino worker groups broadly backed the government’s plan.

Monday’s press statement did not mention if the government has discussed how such a ban would be enforced in the city’s casinos.

The imminent return of package tours from mainland China will not only help boost Macau’s tourism businesses, but is also expected to help casinos gain more foot traffic in their mass gaming... END_OF_DOCUMENT_TOKEN_TO_BE_REPLACED