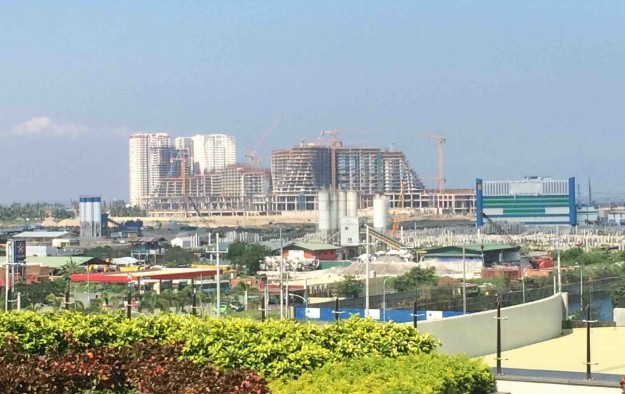 Questions exist as to how quickly demand for casino gaming in Manila, the Philippines capital, will grow relative to the increasing supply of venues, says a note from brokerage Daiwa Securities Group Inc.

“The Manila Bay Resorts project of Kazuo Okada’s Universal Entertainment Corp is set to open in Entertainment City before the end of this year, with its approved gaming capacity potentially growing total market supply by another 53 percent,” said analyst Patricia Tamase.

In September 2014, senior management at the Manila Bay Resorts project (pictured in a file photo) had mentioned to local media the possibility of the venue having 500 gaming tables and 3,000 slot machines. Since then, regional and global demand for casino gambling has declined, in part due to China’s anti-graft campaign and the slowing of the latter country’s economy.

The Manila Bay Resorts project has three existing private sector rivals in the Manila market, that are all of international standard. They are: Resorts World Manila, opened in August 2009 and controlled by Travellers International Hotel Group Inc, a venture between Philippines-based Alliance Global Group Inc and casino cruise ship investor Genting Hong Kong Ltd; Solaire Resort and Casino, developed and operated by Bloomberry Resorts Corp, and which opened in March 2013; and City of Dreams Manila, operated by Melco Crown (Philippines) Resorts Corp, which opened in December 2014.

Travellers International is currently expanding its Resorts World Manila site and is committed to developing a second scheme in Manila – the US$1.1-billion Resorts World Bayshore.

“Gross gaming revenues [GGR] from the three Philippine integrated resorts grew by 18 percent year-on-year to PHP70.1 billion [US$1.51 billion] in 2015, mainly due to the PHP13.6 billion in fresh contribution from… City of Dreams Manila,” wrote Ms Tamase in Tuesday’s note.

“With this fourth entry into the local gaming space, the market’s bigger concerns would be on how quickly demand can match the new supply, and which existing operators will be taking the biggest hit in market share,” added the analyst, referring to Manila Bay Resorts.

“While still profitable at year-end, Resorts World Manila’s net income was down 26 percent year-on-year to PHP4.0 billion after its GGR dropped by 15 percent,” stated the note.

Resorts World Manila was not only the first to market among the new generation of private sector casino resorts in that city, but is also located next door to Manila International Airport, meaning it can easily be reached by international visitors. Manila is infamous for its traffic jams.

As of the end of 2015, Resorts World Manila had 311 casino tables, 1,882 slot machines/electronic gaming machines, and 220 electronic table games, according to Travellers International’s 2015 annual results.

The other integrated resorts are at Entertainment City – a land reclamation area at Parañaque in Metro Manila – and each project is required to have a minimum US$1 billion investment as per agreements made with the country’s regulator, the Philippine Amusement and Gaming Corp, also known as Pagcor.

As of December 31, the total number of electronic gaming machines and tables at Solaire Resort and Casino stood at 1,839 and 392, respectively, according to the annual report of developer and operator Bloomberry Resorts, filed on Friday.

As of December 31, 2015, City of Dreams Manila had 261 gaming tables, 1,579 slot machines and 83 electronic table games in operation, according to the annual report of its operator, filed on April 13.

The imminent return of package tours from mainland China will not only help boost Macau’s tourism businesses, but is also expected to help casinos gain more foot traffic in their mass gaming... END_OF_DOCUMENT_TOKEN_TO_BE_REPLACED