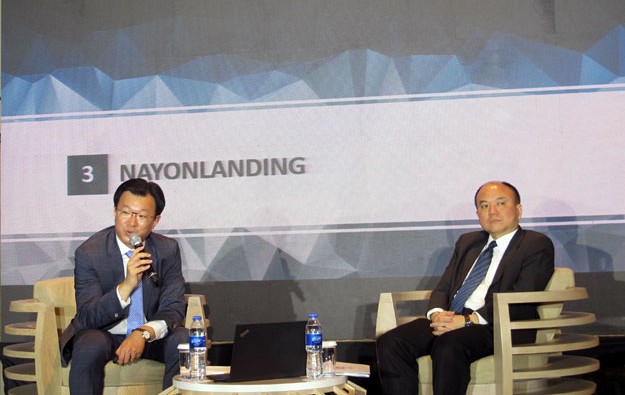 “Given the sizeable population in the Philippines, we expect locals to account for the majority [of our customers]. We are looking at about 70 percent domestic [visitors], 30 percent foreigners,” Jay Lee (pictured, left), chief operating officer of Landing International, made the comment during a press conference on Tuesday, in Manila.

He added: “Foreigners will be mainly from the markets we are currently serving, which is mainland China, Hong Kong, Taiwan, Macau, and [South] Korea – a very large segment.”

The Hong Kong-listed firm announced a fortnight ago that the Philippine casino regulator, the Philippine Amusement and Gaming Corp (Pagcor) had granted a provisional gaming licence to Landing International’s wholly-owned unit Landing Resorts Philippines Development Corp. The permit was “to operate a casino at [the firm's] integrated leisure and entertainment resort within Entertainment City,” in Metro Manila, the filing noted.

The company held a ground breaking ceremony today (Tuesday) for the casino project, with the firm expecting to begin operations locally “in early 2022”. The provisional licence and the regular licence will together “be valid until July 11, 2033,” and upon expiry the regular licence could be renewed by Pagcor, according to previous filings from Landing International.

In Tuesday’s conference, Mr Lee confirmed that the Manila scheme would open in phases, starting in early 2022.

“For a resort like this we will have to open in phases, so I expect the theme park to come up before the hotel, food and beverage [outlets], and then the casino,” said the firm’s COO. “For the casino we are looking at the first quarter of 2022, February or March.”

Pagcor had said in a statement last month that Landing Philippines would have to open first the scheme’s proposed theme park before being allowed to begin casino operations.

“Landing may not commence casino operations before the end of February 2022 in observance of Pagcor’s agreement with the existing integrated resorts and casinos in Entertainment City, to give them a period of five years to allow the industry to mature starting February 2017,” said Pagcor at the time.

The Philippines casino resort – dubbed NayonLanding – has a price tag of US$1.5 billion. The project is due to be financed “by internal financial resources and cash flows” from Landing International’s operations and borrowings, according to the Hong Kong-listed company.

In a Monday filing, the firm said that in 2017 it had used approximately HKD215.7 million (US$27.5 million) – from the net proceeds of a share placing conducted last year - “for administrative costs and start-up working capital for the potential operation in the Philippines”.

David Hoon (pictured, right), senior vice president and chief financial officer of Landing International, said in the press conference that the casino would have a total area of approximately 28,000 square metres.

The company said it expects to employ approximately 10,000 people by 2020, “with north of [more than] 80 percent being Filipinos,” said Mr Lee.

The project is designed to offer 1,500 hotel rooms under several brands, an indoor “cultural theme park” and a water park due to make reference to the Philippines’ heritage and history, and what is intended to be Asia’s largest indoor movie-based theme park. The executives did not disclose the likely partners or brands for these amenities. The scheme will also have a 4,000-seat convention centre, a shopping mall and several restaurants.

Landing International’s COO said he was confident in what the company had to offer, which he said would differentiate the firm’s project from the existing casino resorts at Entertainment City.

His firm’s facility would offer “family, leisure, entertainment, [and an] integrated resort,” stated Mr Lee. “We [will] have a huge-traction business, whether it is the indoor movie theme park, the Nayong Filipino Waterpark, or the Nayong Filipino Cultural Park. These differentiate us from the existing competitors [in the Manila market].”

He further noted: “Manila has such a huge domestic population but there is no core family attractions currently within Entertainment City. This [non-gaming offering] certainly positions us differently.”

Mr Lee also shrugged of concerns regarding getting a regular licence to operate the casino.

“We started looking at this investment more than a year ago. Our chairman was able to meet up with the President [Rodrigo Duterte] … and he welcomed foreign investors and set us up with different departments, to help us look for a suitable site,” said the executive.

He added: “There was no uncertainty [regarding this investment], nor a case of the government not being clear in terms of what it wanted.”

Macau recorded 965 “gaming-related” crimes in full-year 2022, down 29.7 percent on the 1,372 identified in the previous year, according to the latest statistics published on Tuesday by... END_OF_DOCUMENT_TOKEN_TO_BE_REPLACED