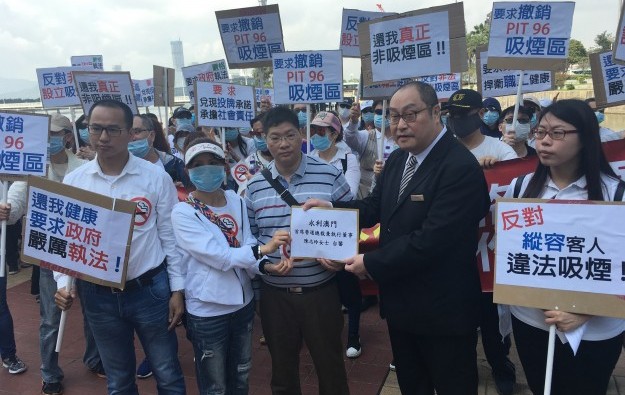 The march was organised by people identifying themselves as employees at Wynn Palace, the casino firm’s Cotai property. They later handed a petition to a representative of Wynn Macau Ltd.

Choi Kam Fu, styled as director general of a group called the Macau Gaming Enterprise Staff’s Association, accompanied those on the march. He told GGRAsia in a telephone interview on Tuesday that the workers had sought assistance from the Macau Federation of Trade Unions in organising the march.

He said those marching were mainly frustrated by what they claimed was Wynn Macau Ltd’s inaction on the issue of smoking control even after a signature collection that took place in March, which was also said to be assisted by the Federation.

“Wynn Macau Ltd has not made much improvement in terms of smoking control. That is why employees were forced to conduct the signature collection and the [Tuesday] march,” Mr Choi said.

“The employees also said that the company continued to ask them, during internal briefing sessions, not to stop customers from smoking illegally. If staff members do advise customers not to smoke [inside the property], they would be reprehended by their superiors. The main demand this time is that the company should respond and make improvement as soon as possible,” he said.

In an emailed reply on Tuesday to GGRAsia, Wynn Macau Ltd said it “makes every effort to comply with Macau’s tobacco control law”.

The company said that it received “excellent support and guidance” from the city’s Health Bureau, the Tobacco Prevention and Control Office, and the local gaming regulator, the Gaming Inspection and Coordination Bureau “who frequently inspect our casinos to ensure that visitors who violate Macau’s smoking laws are appropriately prosecuted”.

Mr Choi added that representatives of the workers have already met with the management of Wynn Macau Ltd last week, with the Macau Federation of Trade Unions coordinating the meeting. However, those complaining said they had not see any improvement since then, which prompted them to organise the Tuesday march, stated Mr Choi.

Although labour unions and labour lobbying groups are not recognised parties to workplace disputes under Macau law, the Federation itself is commonly consulted by the Macau government. Mr Choi’s association is an affiliate of the Federation. At least two Macau legislators that are supported by the Federation also took part in the march.

Mr Choi said the protestors would decide whether to take action additional to Tuesday’s march.

In a press release issued by Macau’s Health Bureau on Monday, the authority said that it had conducted jointly with the gaming bureau, 236 inspections in gaming venues between January 1 and March 31 this year, resulting in 396 fines being issued. The bureau said that the number of joint inspections and prosecutions rose by, respectively, 41.3 percent and 138.6 percent compared to the prior-year period. Among those prosecuted in the period, 87.1 percent were tourists, according to the Monday release.

A dozen people describing themselves as employees of Wynn Macau Ltd had delivered a letter to the Macau government headquarters in January, alleging the firm had been lax in its enforcement of existing smoking regulations.

Wynn Macau Ltd added in its Tuesday statement emailed to GGRAsia: “We look forward to January 1 2019 when the revised tobacco control law takes full effect and new, state-of-the-art, smoking facilities will officially open in Macau’s casinos. We believe that these new smoking facilities will significantly reduce the amount of casino smoking offences.”

A casino cruise brand reportedly controlled by Malaysian entrepreneur Lim Kok Thay is to launch services from Singapore fewer than five months after the Lim family-founded Dream Cruises brand of the... END_OF_DOCUMENT_TOKEN_TO_BE_REPLACED