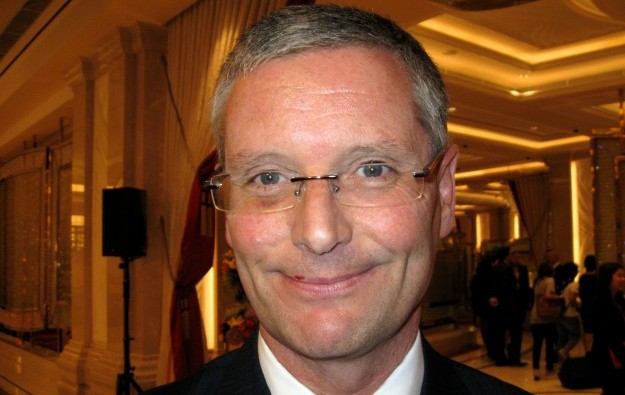 In a wide-ranging conversation with GGRAsia and several other media representatives, Kevin Clayton (pictured), chief marketing officer of Galaxy Entertainment Group Ltd (GEG), explained that the current challenging business conditions in Macau provide a chance for casino managements to utilise a wider range of marketing skills than previously.

“This is a time when you are given permission to do things that are quite creative, rather than everybody saying ‘This is how you are going to do it’,” explained Mr Clayton.

The reason for casinos’ changing approach is the retreat of VIP and the relative advance of the mass segment. In 2014 VIP gamblers accounted for just over 60 percent of Macau’s MOP351.52 billion (US$44 billion) casino gross gaming revenue (GGR). That was a very high proportion of revenue compared to most casino markets around the world, but actually a decline from previous years.

This year market-wide, high roller revenue has been steadily sliding as a percentage of Macau GGR. VIP revenue accounted for 55.5 percent of casino GGR in the three months to June 30, down from 58.2 percent in the first quarter.

“VIP is about one-to-one [relationships],” said the Galaxy Entertainment marketing executive. “It’s a question of ‘I know Jack and Jack comes and plays here [my casino]’. Now, because of the market shifting… revenue [might] be going back[wards], but actually with… the emergence of mass, I feel very excited, because it is playing to my territory.”

Currently, said Mr Clayton, Macau casinos are focusing on how to communicate more effectively with and serve more effectively their “tens of thousands” of mass players. He explained that is a fundamentally different set of marketing disciplines from dealing with VIPs – many of whom in any case have their primary relationship with a junket middleman rather than with the casino management.

“Two years ago, everybody [Macau operators] would have been chasing a few hundred players. It would have made the difference to everybody’s P and L [profit and loss statement]. Now you are focusing more on serving tens of thousands,” said Mr Clayton. “But you still want to have the highest possible yield. And that means – in our case – getting people to trade up from where they could go somewhere else in Macau. Because there’s always somewhere cheaper. Our aim is not to have a race to the bottom.”

He added: “To win this ‘game’ in Macau now, you [as an operator] have to remain true to yourself in terms of what you see as being core to your brand. In our case it is all about product quality, service orientation, and the authenticity around what we do – whether that’s food or otherwise. We will never compromise on that.”

The need to address more effectively “tens of thousands” rather than “hundreds” of players comes at a time when reportedly Macau operators are looking to cut their marketing and advertising budgets. “Cost cutting measures [among Macau casino operators] have intensified in the last six months after companies realised that some of the revenue losses are permanent,” Morgan Stanley group said in a report in September.

“Everybody’s trying to right-size their business. And advertising needs to be viewed as an investment, not a luxury,” said Mr Clayton.

“We [operators] are no doubt all doing our very best at the moment to make sure that we maintain control of costs but continue to improve our impact – in China in particular,” he stated.

The marketing executive argues there need not be a strictly linear relationship between the amount spent on marketing and advertising and the effectiveness of marketing and advertising communications – especially in the digital age when most consumers carry with them a smartphone, tablet or other digital device, and the distribution costs involved in reaching each player’s device can be modest relative to campaigns via print or other traditional media.

“Do you need real heavyweight advertising to win the casino [gaming market] at the moment? Probably not,” he explained. But what companies must do, he says, is be nimble, and make the right offer to players or would-be players at the right time.

“Generally, by resort attractions, you will bring in the general mass [customer]. But what really hooks them is what they see as a function of ‘I played a day, I get today’… Everybody [all operators] plays to this… you [the player] are either getting your food, or your ferry ticket… it’s all about this instant gratification for the daily player.”

If offering so-called ‘comps’ (complimentary products and services) sounds like standard grind segment marketing tactics – the sort honed in markets such as Las Vegas – then Mr Clayton argues in Macau there are important differences. One is that gaming cannot be directly marketed to consumers within mainland China before they leave home, but instead gaming-related offers must be communicated to the customer’s smartphone or tablet often on a same-day basis once they arrive in Macau.

He explained: “With digital you have to be right ‘on the game’. And that means what you are saying at lunchtime today to draw a customer in tonight. There’s an immediacy associated with that channel.”

Before a would-be customer leaves China, they can also be engaged by the casino operator via digital messages about non-gaming offers, via social media. Customers can also be engaged via a reward card membership. In Galaxy Entertainment’s case, that is its GEG Privilege Club, where members can earn points on the gaming floor that can be redeemed for non-gaming items and services.

“Your rewards club… legitimately can be a lifestyle card,” said Mr Clayton. “It gives you access to shopping, hotels, and obviously points related to gaming [spend]. Whereas that kind of card used to be strictly a rewards card for gaming, with the emergence [in Macau] of these shopping locations, these food locations, these integrated resorts, people now sign into the rewards card not for gaming necessarily but for all of the access [to amenities]. And that allows you then to communicate with them directly.”

Social media is also important in reaching mass customers before they get to Macau, said the executive.

“I’m continuously challenging the [Galaxy Entertainment] media communications team and the digital team to put out relevant and really high-quality content, to what is now becoming a very large audience. When you’ve got social media followers bordering on 700,000 or 800,000, you’re starting to reach a sizeable audience,” he stated.

Mr Clayton added: “It is possible for companies to buy social media ‘followers’ but we make a point of not buying them.”

The executive stated: “The advertising for the launch [Galaxy Macau Phase 2, which opened on May 27] has been incredibly effective. You don’t go from a 34,000 to a 54,000 or 55,000 average [people per day] in terms of visitation, without effective advertising.”

VIP business – often via a junket middleman – has been profitable for the casinos in part because of its volume. But the effort involved in terms not only of commission for the junkets but so-called ‘soft costs’ including casinos blocking off luxury hotel rooms for big gamblers, has – even at the height of the high roller boom – put some pressure on table yields and per-player yields in the VIP segment, indicated Mr Clayton.

“You can’t beat the yield of a mass customer,” he stated. “If you do the transition – in general – from a VIP-centric business to a mass-centric business, then – not overnight but over time – from an EBITDA [earnings before interest, taxation, depreciation and amortisation] perspective, it [yield development] is material. It doesn’t totally matter what are the ‘comping’ arrangements. If you have good disciplines around ‘comping’, and you have good controls around it, then the mass business will always be a greater yield [per player dollar spent],” he explained.

Just because the high stakes table gambling segment has been under pressure in Macau doesn’t mean one-to-one relationships with high-limit players can be ignored. Galaxy Entertainment recently opened the Pavilion VIP Room – actually a 41-table cash-play space for the so-called ‘premium mass’ segment, with minimum bets ranging from HKD2,000 (US$258) to HKD10,000.

“When it comes to winning the market [as a whole], you have got to win in your premium [mass] and middle mass market. That’s where a large proportion of your revenues are generated… and that’s about relationships,” Mr Clayton stated.

Mr Clayton for his part said that when appealing to a spectrum of players, it helps not only to have a range of gaming and non-gaming services at different price points at a single big resort, but also to have a portfolio of properties.

“We already have a portfolio in Macau. We have Galaxy Macau at the top end, StarWorld Hotel in the middle and Broadway Macau at the more affordable end.”

During the VIP boom, Macau was famous for its relentless focus on live dealer baccarat. Now even baccarat high rollers are requesting a range of gaming services such as poker, said Mr Clayton. The company recently opened Pavilion Poker – a mainly casual cash play poker room – at the heart of its gaming floor at Galaxy Macau.

He added: “This isn’t about one big cannon, one big bullet. This is about continuing on a journey with your customer.”

Macau casino operator Galaxy Entertainment Group Ltd said in a Wednesday statement, in response to GGRAsia’s enquiry, that “there are no gaming promoters currently operating at Galaxy... END_OF_DOCUMENT_TOKEN_TO_BE_REPLACED