Mass-focused Jai Alai to have up to 40 tables: exec 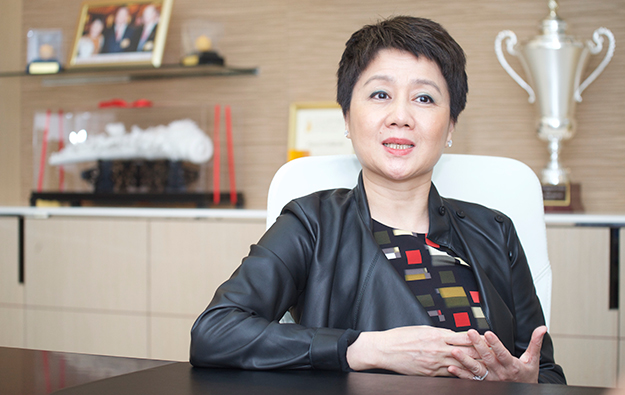 The Jai Alai complex will have “about 30 to 40” mass gaming tables when it reopens, an executive director of Macau casino operator SJM Holdings Ltd, Angela Leong On Kei (pictured), said on Thursday. Ms Leong was speaking to reporters on the sidelines of the 2016 SJM Charity Auction and Dinner.

Also attending the event was SJM Holdings chief executive, Ambrose So Shu Fai. Mr So additionally said that the gaming tables to be deployed at Jai Alai Casino will be transferred from the firm’s existing inventory.

The executive however did not mention which part of SJM Holdings’ gaming business would supply the tables to the refurbished Jai Alai. The tables originally held by the old Jai Alai were absorbed into the group’s table inventory at the time the property was closed for redevelopment.

The extensive revamp of Jai Alai – a venue near Macau’s main ferry terminal on the city’s peninsula – was announced in 2012. Construction works should be completed by the end of the year, Mr So told reporters on Thursday.

Brokerage Daiwa Securities Group Inc wrote in a note last week that the management of SJM Holdings said – on a conference call following the announcement of the third quarter results – it expected Jai Alai to reopen in early 2017, with 35 tables, 100 slot machines and 132 hotel rooms. “Capital expenditure is said to be approximately HKD1 billion [US$128.9 million],” added the Daiwa memo.

The Jai Alai complex will also feature a shopping mall, the firm had said in previous filings. “There will be some special local restaurants [at Jai Alai], especially for helping micro-, small- and medium-sized companies here,” Ms Leong told reporters on the sidelines of Thursday’s event.

The SJM executive noted that the reopened Jai Alai will also see the return of the popular restaurant The Grand Buffet.

The Grand Buffet had been featured in SJM Holdings’ flagship property Grand Lisboa, but closed in 2014. The buffet restaurant is currently running as a 360-degree revolving restaurant in Hopewell Centre, Hong Kong.