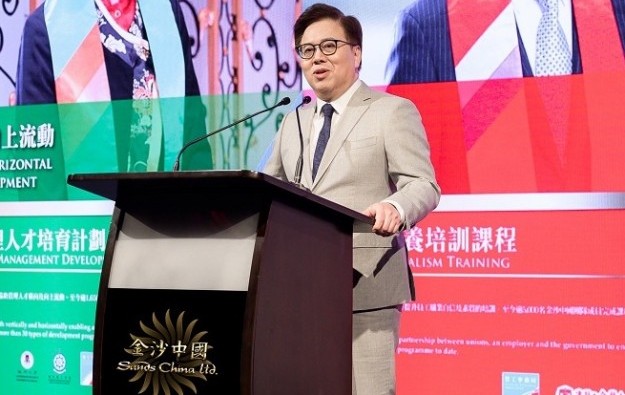 The president and chief operating officer of Macau casino firm Sands China Ltd, Wilfred Wong Ying Wai (pictured), says the company expects a “more stable result” for its balance sheet in the coming quarters, on the strength of the company’s “mature mass-market segment”.

As long as the number of visitor arrivals to Macau continued to rise, “we are probably more insulated to many of the VIP segment impacts” in the Macau gaming market, he suggested, in comments aired on Wednesday by local public broadcaster TDM.

Mr Wong was speaking to reporters on the sidelines of a Sands China graduation ceremony for some of its employees. The company said a total of 6,200 workers graduated from its training programmes in 2018-2019. More than 700 of them attended Wednesday’s ceremony.

Macau’s gross gaming revenue (GGR) fell in year-on-year terms in five of the first eight months of 2019. The city’s casino GGR tally in the eight months to August 31 stood at MOP198.22 billion (US$24.5 billion), down 1.9 percent from the prior-year period, according to official data.

Investment analysts have said that Macau casinos have experienced challenging trading conditions in 2019, with the U.S.-China trade war having an impact, and choppy trends seen in the VIP gambling market.

Mr Wong said Sands China has “developed quite a mature mass market” segment over the years, whereas the VIP segment had “always been traditionally a very small factor” in the company’s business.

“So, we look forward to a more stable result in the coming quarters,” he stated.

In July, Sands China said its second-quarter net revenue reached US$2.15 billion, up 1.4 percent from the prior-year period. Adjusted earnings before interest, tax, depreciation and amortisation for the period grew by 2.0 percent to US$765 million.

Driving growth at Sands China in the second quarter was a property-wide 14.7-percent year-on-year increase in base mass-market table wins, according to the company.

The company said the contribution of its mass-market gaming table department to profit grew by 3 percentage points in year-on-year-terms, from 53 percent in the second quarter 2018 to 56 percent this year.

During the same period, the contribution of VIP gaming to profit fell by 2 percentage points, from 9 percent to 7 percent, added the company.

In his Wednesday remarks, Mr Wong said the market expected some negative impact on the number of visitor arrivals to the city due to some events outside the city’s boundaries, including some disruption caused by the Hong Kong protests.

But he added: “I think Macau’s tourism industry is much more diversified right now … I think the way we are developing [the market] is towards a more healthy structure for the [city’s] gaming business.”