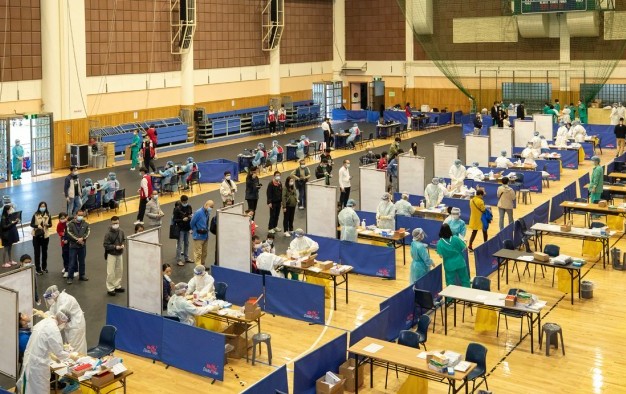 Macau entered “immediate prevention” mode from 1am on Sunday (June 19) regarding “extremely high risk” of a widespread Covid-19 outbreak, after several people tested positive for the related virus at a number of locations in the city, said the local government.

Of the 12 confirmed cases as of Sunday noon, eight of the people showed no symptoms. All the cases involve people that were not undergoing quarantine and were living within the community. Their places of residence have been sealed off to outsiders, stated the authorities.

Mass testing of the population (file photo shown) – via 53 testing stations – is also being started from noon on Sunday, and is due to be completed in 48 hours.

Macau has had three previous mass-testing exercises, all in 2021. One was in early August that year; one in late September; and the third in October.

From 6am on Sunday, anyone wishing to leave Macau has been required to submit a certificate issued within 24 hours of intended departure showing a ‘negative’ result for Covid-19 infection, the city’s government said in a press release.

Authorities in the neighbouring city of Zhuhai, Guangdong province, also announced that, starting from 9am on Sunday, people travelling from Zhuhai to Macau would need to present a certificate issued within 48 hours of departure, showing a ‘negative’ result for Covid-19.

The Macau authorities have also advised the local public to avoid leaving home. Restaurant dining-in has been temporarily banned: only takeaway sales are allowed.

Hong Kong-listed Wynn Macau Ltd says it will inject nearly MOP4.80 billion (US$596.4 million) into Wynn Resorts (Macau) SA. That is in order to comply with Macau’s revised gaming law and the... END_OF_DOCUMENT_TOKEN_TO_BE_REPLACED