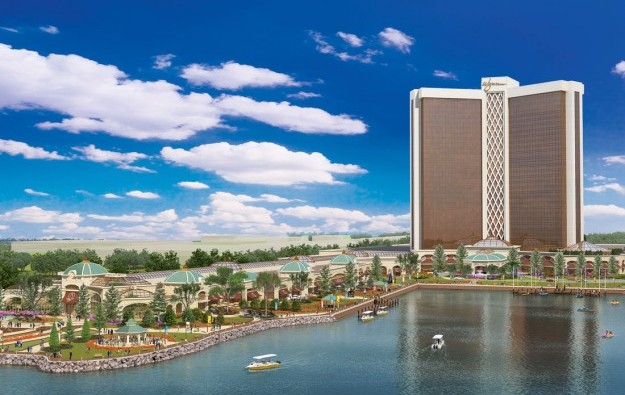 The Massachusetts Gaming Commission on Wednesday unanimously confirmed Wynn Resorts Ltd as the winner of a casino gaming licence for Greater Boston.

It followed a three to one preliminary vote in favour of Wynn by commission members on Tuesday.

Wynn plans to convert a contaminated site in the city of Everett on the Mystic River north of Boston – that previously housed a Monsanto Co chemical plant – and turn it into a US$1.6 billion gaming resort (pictured in an artist’s rendering).

The licence award concludes a nearly two-year selection process that saw the firm beat out a high quality proposal by Mohegan Sun for a casino in the city of Revere, also north of Boston.

“This is an amazing project that will have a significant impact on job creation and economic development,” said Robert DeSalvio, senior vice president of development for Wynn, in a statement on Wednesday.

There are still some outstanding issues. The Mayor of Boston, Martin J. Walsh, on Tuesday told local media he was looking for an improved offer from Wynn regarding so-called ‘mitigation payments’ for the local community.

And Carlo Santarelli of Deutsche Bank AG in New York, said on Tuesday in a note to investors: “The process…is not over as the vote to repeal gaming [statewide] remains on the ballot for November.”

But the analyst added: “We see the likelihood of a repeal as low.”

Union Gaming Research LLC said in a note on Wednesday that although it regarded the Massachusetts licence award as positive, it was lowering the price target on Wynn Resorts’ Nasdaq-listed shares to US$227 – from US$253 – “to reflect current macro realities”.

Analysts Robert Shore and Grant Govertsen wrote: “From a stock perspective, we maintain that there is minimal current valuation (if any) ascribed to Wynn currently for optionality in Massachusetts.”

They added: “We estimate that the property could generate EBITDA [earnings before interest, taxation, depreciation and amortisation] amounting to US$240 million to US$250 million per annum further supported by the aspirational nature of the Wynn brand, which carries the potential to draw greater visitation than a typical regional casino.”

“The project is expected to create 3,700 construction jobs and 4,382 permanent jobs, generating US$267 million per annum in state and local taxes,” added Union Gaming.

Most of Macau’s casino operators are likely to generate positive free cash flow in the first quarter, given the robust recovery level of mass-market gross gaming revenue (GGR) in January, relative... END_OF_DOCUMENT_TOKEN_TO_BE_REPLACED