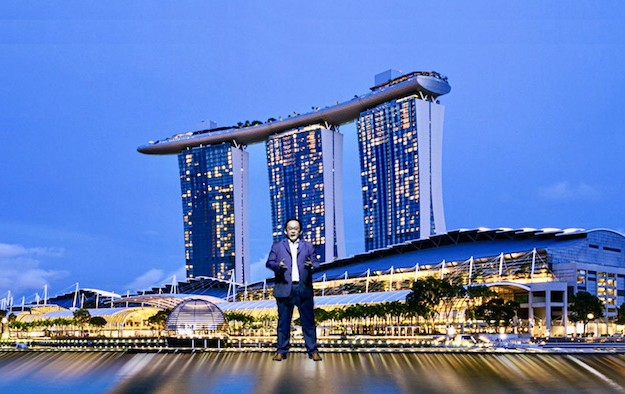 Singapore casino resort Marina Bay Sands (MBS) says it has added “mixed reality” presentation technology to the services offered at its so-called hybrid broadcast studio, an on-site facility it is marketing for events that combine in-person attendance with input from online delegates.

Mixed reality technology is said to integrate the virtual and physical worlds (example pictured) to make possible an immersive and interactive presentation.

It was utilised at what the venue called Singapore’s “first hybrid trade show”, TravelRevive, presented by ITB Asia, a leading travel-industry events organiser, and Singapore Tourism Board, on November 25 and 26.

“Marina Bay Sands has accelerated… adoption of technology to adapt to the new environment,” said Paul Town, senior vice president, resort operations, at the property, as cited in prepared remarks in a Thursday press release from the venue.

The hybrid broadcast studio, at the Sands Expo and Convention Centre, was first publicised by Marina Bay Sands in August, as a way of hosting meetings business in what the resort termed the “new era” of a world with Covid-19.

They were: WiT Experience Week 2020, focusing on digital travel business, and held from September 28 to October 1; and Singapore International Energy Week, from October 26 to 28.

The year 2024 is still the targeted start date for operation of a five-star hotel and casino complex at the Westside City Project (pictured in an artist’s rendering) in Manila, the Philippine... END_OF_DOCUMENT_TOKEN_TO_BE_REPLACED