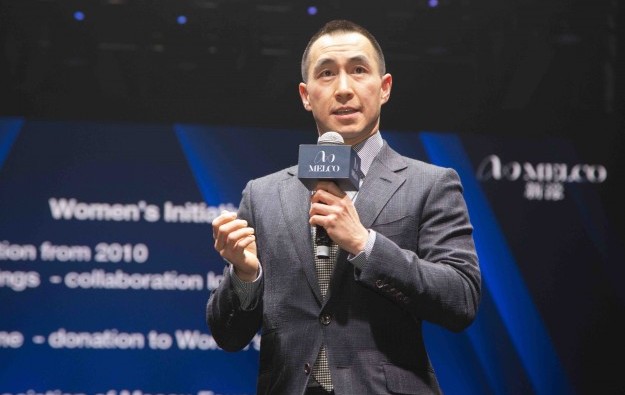 The chairman and chief executive of Asian casino developer Melco Resorts and Entertainment Ltd, Lawrence Ho Yau Lung (pictured), said on Wednesday that he was still confident of “decent growth” in the Macau market’s casino gross gaming revenue (GGR) for 2019, and was optimistic about his own company’s gaming performance.

“Look, it is not going to be as great as 2018 – 2018 blew everybody’s expectation at a 14-percent growth,” Mr Ho remarked, referring to Macau’s year-on-year GGR performance for that period.

Macau’s accumulated casino GGR for full-year 2018 grew to nearly MOP302.85 billion (US$37.57 billion), according to statistics from the local regulator, the Gaming Inspection and Coordination Bureau.

But in the first two months of this year, there was a slight year-on-year contraction in aggregate in the city’s GGR, despite a 4.4 percent upswing in February GGR, helped by the Chinese New Year holiday.

“For us as a company, Melco, we care more about the underlying cash flow and EBITDA [earnings before interest, taxation, depreciation and amortisation], and I think the quality of the cash flow is better now then it’s ever been,” the Melco Resorts boss stated in his Wednesday comments. He also suggested that the firm’s strength was in its focus on the mass and premium-mass segment of its gaming business.

A number of analysts have flagged a possible year-on-year decline marketwide in March GGR, citing weakness in the VIP gaming segment.

Nonetheless a Monday note from Japanese brokerage Nomura, suggested Melco Resorts had been a share gainer in terms of VIP gambling volume in March – against the grain of a general month-on-month softening in Macau’s VIP rolling chip performance.

Mr Ho said on Wednesday: “Melco [Resorts] is, if not the least-reliant, then the second-least reliant on VIP business… All mass business is very strong. And we have been focusing on premium mass. So far, I think we’re having a good year.”

Mr Ho was speaking to media on the sidelines of a company event, “Melco Women’s Forum”, which also saw the launch of a number of initiatives related to women.

The Melco Resorts chairman said the firm was awaiting final approval from the Macau government in order to start construction of phase two of the group’s majority-owned Studio City on Cotai. The city’s government had previously given Melco Resorts a three-year extension on the original deadline for development of the land concession plot where phase two will sit.

Mr Ho had mentioned in the group’s fourth-quarter earnings call that the addition to Studio City was expected to have two hotel towers, a water park, a cineplex and additional gaming space.

“We’re just waiting for the last couple of government approvals from various departments. So we’re working through that. And we understand that there is a lot of backlog and things that need to be approved. But you know, we’re all ready to go. We’re literally – [when] they give us the approval, we can get started right away,” Mr Ho stated in his Wednesday commentary.

The government has been urging local casino operators to up the amount of non-gaming facilities they offer. Studio City was conceived as a family-focused resort, although an attraction introduced for the property’s October 2015 launch; “The House of Magic”, was not a success according to investment analysts. It closed in October 2017.

Within the existing phase of Studio City, the firm will open a new non-gaming facility – a trampoline zone branded as “Flip Out” – in the “next couple of months”, Mr Ho confirmed on Wednesday.

In early January, Melco Resorts launched at Studio City what it termed a “pop-up” virtual reality play zone branded as “Legend Heroes Virtual Reality Park”. It was due to pave the way for a 50,000-square-feet (4,645-sq-metre) permanent venue later this year.

In late January, the company also launched a car stunt show, “Elēkrŏn” at Studio City. In his Wednesday commentary, Mr Ho said consumer demand for the show had been “good”, but noted there would be adjustments to the spectacle as the show’s residency progressed.

When asked if “Elēkrŏn” was likely to run continuously beyond the first half of this year, Mr Ho said: “We will see, and we will judge according to the feedback we get to the show.”

“Even if… Elēkrŏn has a hiatus [in Macau], the goal is that it will tour in mainland China in future,” he noted.