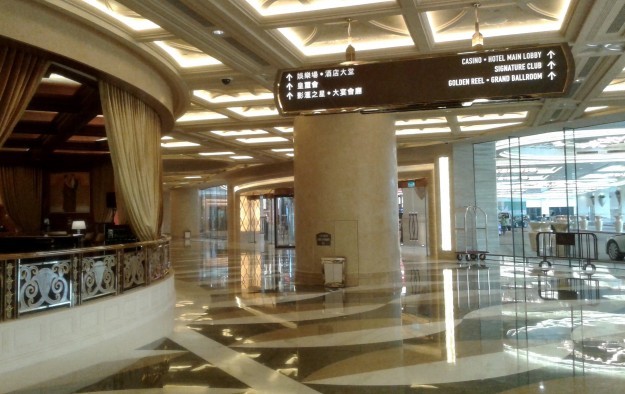 Macau casino operator Melco Crown Entertainment Ltd has seen its food and beverage workforce reduced by 200, according to a report in Portuguese-language newspaper Ponto Final, citing a source it did not identify.

The news outlet said the workers affected were people from mainland China, that had been employed at Studio City (pictured) under Macau’s non-resident work visa system. Such staff are also referred to locally as “blue card” holders.

The newspaper further reported that the slimming of the workforce had been achieved by consolidating some food and beverage operations.

GGRAsia approached Melco Crown for comment on the report, including whether the affected workers were from the mainland.

The company said in an emailed reply: “Melco Crown is committed to the development of local employees and their career opportunities. We are not laying off our staff members. However, the blue cards of some of our food and beverage employees have expired.”

Additionally, GGRAsia approached Macau’s Labour Affairs Bureau for confirmation of the number and nature of posts affected by the Melco Crown labour rejig, and from where the affected workers originated. We had not received a reply by the time this story went online.

Investment bank Morgan Stanley said in an April report that it was difficult for Macau casino operators to achieve flexibility regarding staffing. The institution noted in particular that only local ID holders can be employed as casino table games dealers, and that once such locals are employed it is hard for gaming firms to lay them off. In recent times, some table dealers have been invited by gaming operators to work in non-gaming roles.

A September report from Fitch Ratings Inc said Studio City was “likely to fail” its first financial tests concerning its borrowings relative to its earnings.

The US$3.2-billion Studio City – a property 60-percent owned by Melco Crown – opened in October 2015 without any VIP gaming tables; but recently said it was adding some.

Casino equipment supplier Sega Sammy Creation Inc said in a Friday release it was debuting its Genesis Crest 43J cabinet in Asia. The product will be available at an in-person trade show, G2E Asia:... END_OF_DOCUMENT_TOKEN_TO_BE_REPLACED