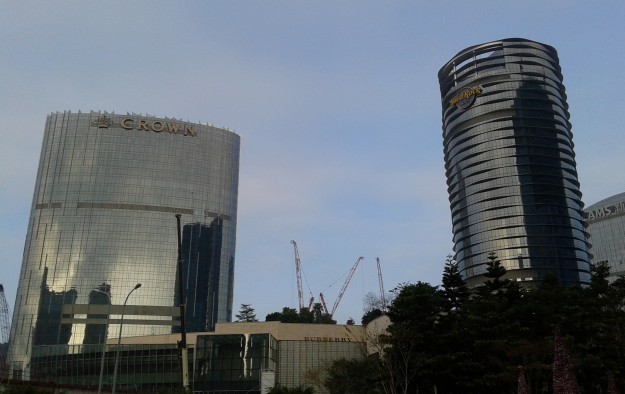 Macau-based casino operator Melco Crown Entertainment Ltd reported net income for the fourth quarter of 2014 of approximately US$1.12 billion, down by about 20 percent from the just over US$1.39 billion reported for the same period in 2013.

It also confirmed that its 60-percent owned, US$3.2-billion (all-in) new Cotai resort Studio City would likely open in the third quarter of 2015 – a slight shift of emphasis from the “mid-year” mentioned in a press event on January 12 to announce the new resort’s facilities.

But Anthony Wong of UBS Securities Asia Ltd and Robin Farley of UBS Securities LLC said in a note after the results: “Company guides that Studio City is on budget and on schedule to open in the third quarter, with all building and labour permits already in place. However, management’s tone on table grant has turned more cautious, commenting that a competitive project’s opening might obtain much fewer tables than expected. We currently assume Studio City opens in late fourth quarter.”

Adjusted property earnings before interest, taxation, depreciation and amortisation (EBITDA) for the quarter was US$278.6 million, compared to US$394.4 million in the fourth quarter of 2013. The 29 percent year-on-year decline was, the company said, attributable to lower group-wide rolling chip volumes and rolling chip win rate, together with a lower contribution from the mass-market table games segment.

David Bain of U.S.-based brokerage Sterne Agee, said in a note referring to the group’s flagship Macau property on Cotai: “City of Dreams margins were down 150 basis points sequentially and were 170 basis points below our forecast due to employee retention and lower than theoretical hold. City of Dreams margins will increase in the first quarter of 2015 from the fourth quarter of 2014, in our view.”

Last week a number of investment analysts highlighted recent increases in the cost of casino sales for Macau’s operators, faced with higher wages in order to retain local staff against the backdrop of a 1.7 percent unemployment rate.

The net loss attributable to non-controlling interests during the fourth quarter of 2014 of US$26.3 million related to Studio City and City of Dreams Manila, the firm’s new Philippines resort, which opened officially on February 2.

For the year ended December 31, 2014, Melco Crown reported net revenue of US$4.8 billion versus US$5.1 billion in the prior year. The year-on-year 6 percent decline in net revenue was primarily attributable to lower group-wide rolling chip revenues, partially offset by improved group-wide mass market table games revenues stated the firm.

Lawrence Ho Yau Lung, co-chairman and chief executive of Melco Crown, said in a statement accompanying the results: “While 2014 was a challenging year for Macau, I am pleased with both our relative operating performance and the meaningful advancements we have made towards realising our significant growth pipeline, positioning us to succeed now and in the future.”

“Our strategy and commitment to continually enhancing our current product offering in Macau, including the ongoing development of our luxury retail precinct and the iconic fifth hotel tower at City of Dreams [Macau], which remain on track for openings in the first half of 2016 and first half of 2017, respectively, ensures all of our operating assets remain highly competitive in a constantly changing environment,” said Mr Ho.

He added: “Studio City, the next standalone integrated resort to open in Macau, remains on track to meet its design and construction budget of US$2.3 billion and its scheduled opening in the third quarter of 2015.”

In a separate statement, the company said it would pay a quarterly dividend of US$0.0171 per share. The dividend will be paid on March 16 to shareholders whose names appear on the register of members as of March 4.